The safety of the president is paramount to national stability 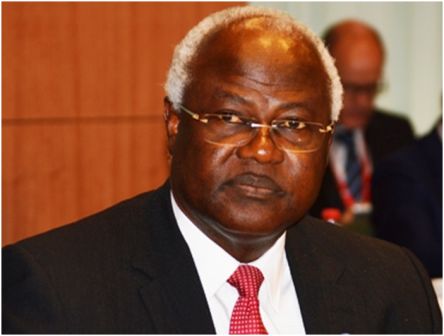 The safety of the president is paramount to national stability

and cannot and should not be compromised

Many Sierra Leoneans have gone to school to study impressive professions but they seem to be ignorant about national security. national stability, and the consequences  of a president of a fragile country suddenly meeting unexpected  harm. Some people do not also care for the safety of the President, as a human being.  For some educated people to suggest that President Ernest Koroma should go to the Ebola-infested regions,   to prove  that his Government takes the Ebola fight seriously,  is naive, reckless and depraved . (Photo: President Ernest Bai Koroma)

The President of a country is also the very embodiment of everything that underpins that nation. After God the Father Almighty (may His name be praised ), the President is be-all and the end-all of that country’s welfare, survival and longevity. If the President fails, the nation has failed. If the President dies needlessly, the nation has died needlessly. He cannot therefore be foolishly pushed to his own demise .Whatever the imperatives to prove that the Government is serious about Ebola , it cannot and must not be done by needlessly pushing the President to visit the Ebola areas at this time to prove a point. President Koroma has nothing to prove to anybody. He has done enough already.

President Koroma can still be on his desk at State House and demonstrate his commitment and seriousness towards the Ebola fight. He can be at his desk and mobilize and distribute resources and medical supplies to the Ebola-affected areas. From State House, President Koroma can mobilize international support for our war with Ebola, and that is what he has been doing .He does not need to go to Kailahun to prove that he is serious or committed about stopping the disease. He could get infected and die and that will impact on our national security. We have to be direct and call things by their names to show the seriousness of what we are saying.

Sierra Leoneans must now begin to disabuse themselves from the mania of doing things to prove a point. This idea of people doing things to prove something is responsible for the presence of some fake politicians and fake activists (with their fake and pretentious agendas) in our midst . Commitment and seriousness are not demonstrated by vainglorious and needless actions that result in more harm than good. They are demonstrated by deeds that come genuinely from the heart.

As a matter of fact, when there is a national tragedy or threat to national survival, the standard procedure all over the world is to protect the President , not push him into danger. When the terrorists hit the United States in 2001, the media reported that plans were being put in place to hide President George W. Bush in a secret bunker. If America should have a national plague , the U,S. President will be protected from it. Nobody will ask that the President go to the plague-infested places to prove that he is serious about fighting the plague. But even if the U.S. people do it , we know that the richest and the most technologically-advanced nation in the world would provide fool-proof protection for its President to ensure that he comes out of it safe. We are a developing country . We do not have such technology and resources. We cannot take the risk. George Bush could afford to go to Iraq while the war was on, because America has state-of-the-art security technology to lead him only to the safest places, far away from the battleground. They have a crack air defence system to protect the President both in the air and on the ground.

In Sierra Leone, where security challenges still exist, what if an Ebola-infected patient, out of excitement, dashes at the President and hugs him out of fascination and appreciation ?  What if somebody aggrieved with Government (with all the blames going around ) decides to wilfully infect the President ? We can no longer take these events from granted.

If it is only to talk to the ordinary people from a safe place,  it is alright, but to blindly go into the districts and isolation centres and hospitals to interface with the Ebola patients –however turgid the protective garments–is a risk we must not undertake. If the doctors who understand all the precautionary measures better are being infected, what will save the president from the same fate ?

This is not to imply that President Koroma’s life is more valuable than the lives of our precious citizens being infected and dying of Ebola. When Americans were planning to hide their President in a bunker if the terror attacks had become much more serious than it was, they were not implying that President Bush s life was more valuable that those on the streets or those  in harm’s way.  They were looking at the consequences of the President’s death in terms of national safety and national security. In the eyes of God, all human beings are equal. I am deeply sorry for the lives being lost. Everybody, including President Koroma, has expressed sympathy to the affected families. We are all sorry that our people are dying.  I continue to extend my deepest condolence to the families, friends and well-wishers of the victims. However, adding the President to the toll of victims is not the way to prove that we are really sorry for the victims. We must also  look at national security and national stability  consequences if harm befalls the President.  We must look at the welfare  and stability of the entire nation  when we would have (The Lord Forbid ) lost our president needlessly . The President must not go to the Ebola-affected zone because the deadly national insecurity and instability his infection and possible death would trigger would make the Ebola outbreak child’s play . We must not forget that though Sierra Leone has made tremendous strides in peacebuilding and peace consolidation, our country has not shed its fragile shell altogether. There are still dangerous people around us who would use any national crisis, even the reckless demise of the President, to plunge the nation back to war.  How sure are we that the very politicians trying to endanger the President’s life are not doing it for surreptitious purposes ? How sure are we that the very politicians would not plunge the country into chaos with their succession battles ?

It is also not wise to advise President Koroma to cancel the huge economic Summit he is slated to attend in the U.S. in August, along with 47 other African Heads of State, to prove that he is serious about Ebola, as opposition politicians are demanding. His absence from the country for three days will not have any effect on the war on Ebola. The summit has tremendous benefits to offer Sierra Leone, benefits that will help even our health sector . The President is an important member of the world leadership architecture and he has to be at the meeting not only to contribute his ideas and experience but to gain from the discourse further knowledge in statecraft and economic development that will benefit our country. The President will be able to establish new international ties and alliances and strengthen old ones , for the betterment of the nation.

Sierra Leone will not bottom out because President Koroma was out of the country for a week attending this all-important conference. The structures that have been put in place to fight Ebola will not suddenly disintegrate because the President attended a three-day conference abroad.

While we must ensure the government’s total commitment to the Ebola fight, we must be reasonable with the things we suggest for the President to do. Dealing with matters of the Presidency is an entirely different ball-game. There are other factors involved. We have to also look at the national welfare whenever we deal with intricate matters affecting the presidency.

May God save our precious people  from the Ebola. May God also save President Koroma to continue to provide leadership and save and protect our state as the Father of the nation.

By Wilfred Leeroy Kabs Kanu, Minister Plenipotentiary to the Sierra Leone Permanent Mission to the UN