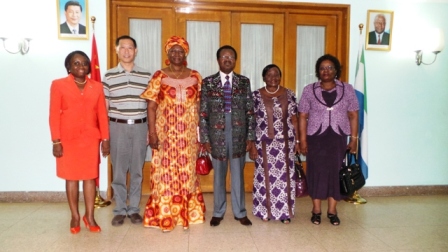 This was disclosed to His Excellency Victor Bockarie Foh, Ambassador of Sierra Leone to the People’s Republic of China on Thursday, July 9, during a briefing session by a cross section of a delegation from the University of Sierra Leone, who were in China on the invitation of the Confucius Institute of China.  The delegation was on a working visit to China to have experience sharing exercises following the successful location and teaching of a Chinese Confucius Institute at Fourah Bay College, Sierra Leone, in  the year 2012.

Introduced in Sierra Leone about two years ago, the Confucius Institute is seen as a “symbol of China-Sierra Leone friendship and furthering the development of cultural exchanges between the two countries.”  This initiative would facilitate, fast track and strengthen cultural understanding between the peoples of China and Sierra Leone. It is a follow-up measure of the Forum of China Africa Cooperation (FOCAC) Fifth Ministerial Conference aimed at promoting cultural exchanges and cooperation between the the People’s Republic of China and all African countries, and in this case, deepening, widening and strengthening of China-Sierra Leone relations.

Sierra Leone, she went on, acknowledges the importance of the People’s Republic of China and the Chinese language on the international arena today. They were in China to engage and hold discussions with Gannan Normal University in particular and the Confucius Institute in Beijing with whose headships they are in agreement with the setting up of a Regional Confucius Institute at Fourah Bay College, University of Sierra Leone.

Mrs. Bernadette Cole also briefed Ambassador Foh about the pending Annual University Awards ceremony held every December to decorate meritorious and deserving students of exemplary performance in various areas of academic performance. She called on Ambassador Foh,himself an alumnus of Fourah Bay College and other alumni at the Beijing Mission to identify themselves with and support the University and called on all alumni to attend the coming Awards ceremony in December this year.

Responding, His Excellency Ambassador Victor Bockarie Foh thanked Mrs. Bernadette Cole and team for visiting their home Embassy regardless of their very busy schedule in China. On the issue of establishment of a Regional Office in Sierra Leone for the Confucius Institute, Ambassador Foh said, he was “happy that Fourah Bay College has taken that decision and is going in that direction” and “as a product of Fourah Bay College with Registration No. 4012, I am very proud of my University, equally proud of Mrs. Cole with whom I was together at Fourah Bay and I feel humbled in pride to be associated with this success story I have just been told.”

Ambassador Foh dilated on values the Chinese people attach to their culture, language, customs and traditions, “something they have preserved over the years.” The setting up of a Confucius Institute at Fourah Bay College, he said “is something we welcome and appreciate as an Embassy.”

He encouraged the delegation to do their utmost and establish strong and cordial relationship with Gannan Normal University and see how they could facilitate exchange visits between the said University and the University of Sierra Leone. “Whatever we could do as an Embassy to facilitate the process, I encourage you to feel free to contact us as we know that China has a lot to offer”

Ambassador Foh used the briefing session to thank the Chinese Government for all her support to Sierra Leone. He however encouraged the delegation to also see how Sierra Leonean culture, values, customs and traditions could be properly articulated and exported to the People’s Republic of China  to continue the process of strengthening the ties between the two Republics and more especially in the areas of language and cultural exchanges.

Ambassador Foh also used the meeting to commend the role that Mrs. Bernadette Cole continues to play in Sierra Leone’s democratic process, especially her role during her tenure as Head of the country’s media regulatory body, the Independent Media Commission. “She was fearless, yet fair and a woman of great courage and substance.”

On the pending University Awards ceremony in December this year, as an Alumnus of the University,the Ambassador promised to support and to handle production and shipment of plaques to Sierra Leone. “This is a way of supporting the University and I look at such gesture as payback time”, he said, and committed himself to attend this year’s event.

Ambassador Foh used the occasion to appeal to the delegation and all Sierra Leoneans to join President Ernestt Bai Koroma in his efforts to fight the Ebola disease currently plaguing our beloved country and Sub-Region. He also informed them about the initial assistance from the government of the People’s Republic of China to the government and people of Sierra Leone to fight the Ebola

The establishment of the Confucius Institute in Sierra Leone would surely promote Sierra Leoneans understanding of Chinese culture and language. Its principal portfolio is the promotion of Chinese language and cultural exchanges between the two countries. The Institute is jointly managed by the Gannan Normal University of Ganzhou Municipality, in the People’s Republic of China and the University of Sierra Leone.

Also present at the briefing session was the Deputy Chief of Mission, Mrs. Kumba. Alice Momoh.  As part of the delegation from the University of Sierra Leone were Mrs. Z Domingo, Deputy Registrar, Fourah Bay College, Professor Liu Hande, Director of the Confucius Institute,USL, Samuel O. Weekes  and Mr. Kenneth Osho amongst others. The delegation has since returned to Sierra Leone.

Share With:
Tags
Confucius Institute of the People's Republic of China
Previous Article