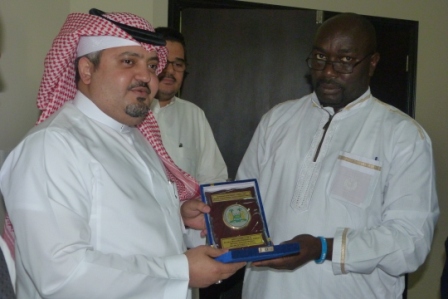 Sierra Leone’s Minister of Social Welfare has appealed to a Saudi carrier to extend its operations to Sierra Leone.  Moijue E. Kaikai leading a three-man delegation to Saudi to make necessary arrangements for Sierra Leoneans intending to perform this year’s hajj made the appeal to the Deputy CEO of Flynas airline on Wednesday, June 25, 2014 during a signing ceremony of Aircraft Charter Agreement to airlift this year’s would-be pilgrims from Sierra Leone.  (Photo: Moijue Kaikai at Flynas office)

Responding, Ahmed Saeed Sultan promised to discuss it with the Flynas management, adding that: “We will soon start flying to Ivory Coast and Sierra Leone could be our next destination.” Sultan went on: “We are really looking at where we can add value to our customers and we will be flying to the business and leisure destinations our customers are demanding.”

Kaikai and team with Flynas team

Flynas is a leading carrier in Saudi Arabia with a good number of fleets, operating nearly 1,000 weekly flights on over 30 destinations within and outside of Saudi Arabia. Launched in 2007, a spokesman of the airline said, it has successfully operated over 140,000 flights carrying more than 16 million passengers, a number that has steadily grown over the years.