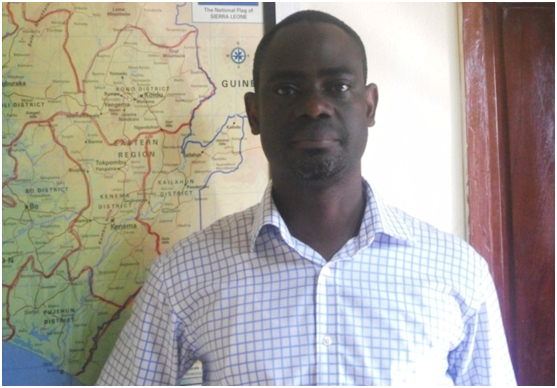 Following the mandate of the special select committee on the International Non-Governmental Organization INGO’s, CBO’s, CSO’s, and Non State Actors (NSA’s) to account to the House of Parliament in Sierra Leone, the Members of Parliament commended IBIS for their development strides in the country.  (Photo: Tijani Hamza, Country Director, IBIS Education for Development)

Chairman of the committee Hon. Claude D.M. Kamanda of Constituency 095 in the Western Rural who also doubles as Chief whip in Parliament in his opening statement said the committee is charged with the responsibility to inquire from the above mentioned NGOs as members of Parliament (MP’s) to better inform and understand their responsibilities, legal status, sectors and activities in the country.

He said the committee’s mandates also requires them to envisage their success and challenges with its partners including sources of income, registration with line Ministries, support funding since 2010 to dates, vision and Mission statements, Areas of Operation both at district and chiefdom levels, Local NGO’s partners with and implementers, target beneficiaries and communities as well as total annual income expenditure and impact created etc.

Hon. Claude Kamanda went further to state that NGO policy regulations 2009 foundation of special select committee on NGOs , and NSAs was set up in line with section 93 (4) of 1991 Sierra Leone constitution tandem with the standing order (SO) 71.

He noted that the mandate of the committee is to investigate programs of activities of various INGOs, NGOs, CSOs, CBOs, and NSAs that are implementing for and on behalf of the people of Sierra Leone that were financed through public needs as provided in Section 111 of the 1991 Constitution of Sierra Leone Act No 6, noting that the committee is also responsible of ensuring that all NGOs account to parliament how they expend finance they received he concluded.

Subsequently, amongst the lists that were interviewed include IBIS Education for Development, BBC Media Action, Willemette International, and many others.

In his response IBIS Education for Development Country Director Tijani Hamza underscore the importance of IBIS with a brief background.  He said his Organization was registered since 2006 with the Ministry of Finance and Economic Development (MoFED) as an INGO to date.

He informed the house that they provide teaching and learning materials, support to up grade school facilities in community schools as well as service training of staff and with a comprehensive raid education in primary schools project for out of school children and youths in Kono district as well as enrolment drive for girls in public and community schools in the program implementation areas.

He said that IBIS sector of operation include Education, Democratic Governance and CSOs capacity Building.

He furthered that IBIS’ support to education seeks to empower the poor and marginalized adults and children and their organizations, their individual and collective rights to relevant quality education in Sierra Leone.  He said that IBIS support to democratic governance also gears towards empowering the impoverished to be actively engaged in decision making process. In order to represent their people, he said capacity building seeks to fulfil rights both state actors duty bearers need to be strengthened and capacitated.

He further informed the committee that they are in good relations with the education, local government, and rural development ministries, district education officers at council as well as chiefdom levels in terms of their strategic management plans.

IBIS governance program director Alpha Umaru Sesay noted that they are always on track towards the development priorities of government and Agenda for Prosperity sector policies of target groups, adding that IBIS overall organizational strategies and related policies and strategies on governance, gender equality, extractive partnership among others.

In an other development IBIS is currently undertaking a programme called Education for Change funded by UNICEF, CIDA and DFID; the main development objective is the Education for Change program in communities and education actors at district and national levels working actively for children and youths in marginalized communities in order to achieve their right to accessible, relevant gender sensitive and quality education.

The project also seeks to increase access to participation in and completion of primary quality education and other opportunities for alternative education for out of school children.

Another year has rolled by and ver...