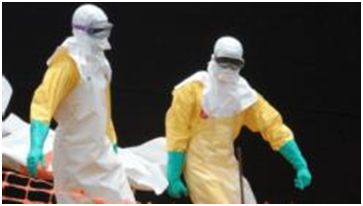 The Director of Disease Prevention and Control, MOHS Dr. Amara Jambai confirmed on ‘Good Morning Salone’ program on FM 98.1, May 26 that four people have died of Ebola in Kailahun.

According to Dr. Jambai the four dead include one MCH practitioner, one traditional healer and two others.

The MCH practitioner who was on her way for check up could not reach her destination but died at Daru.

This is a clear manifestation that the ministry lacks the coordination and monitoring   skills to effectively man our borders.  As early as Saturday 24th May the ministry officials were forcing it down the throat of journalists at the gender empowerment building at John Street Freetown that the 143 suspected cases have proved negative without getting reports from the 7 border districts who are more vulnerable.

“May God help us but this ministry is not capable of redeeming Sierra Leoneans from the claws of this deadly virus-Ebola” said Abdul Sesay.

Allegedly the virus has also killed 15 people in Koindu.

The ministry also called an urgent press briefing later in the day where they confirmed that Ebola has killed 4 people in Sokoma village, Kailahun District.