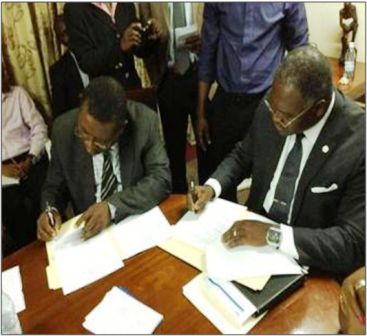 As part of its core values – coalition building and partnership – the Anti Corruption Commission (ACC)  on 8th May 2014 signed a Memorandum of Understanding (MOU) with the Attitudinal and Behavioral Change (ABC) Secretariat at the ACC Conference Room.  (Photo: Executive Director, ABC Secretariat (L) and Commissioner ACC (R) signing the MOU)

The objective of the MOU is to provide a platform for coordination and collaboration between the two institutions in the execution of their respective mandates.

Welcoming members of staff of the ABC Secretariat to the ACC, the Deputy Director, Public education and Outreach Department of the ACC Koloneh Sankoh said the signing of the MOU with the ABC Secretariat was an important occasion as it was aimed at strategic collaboration and familiarization. The Deputy Director informed the audience that the ACC and the ABC have similar vision, as the former is fighting corruption and the latter is looking at attitudes and moral ethics. “The work we do is not different, and with a united front, we are  strengthened in  the fight against corruption”, she noted.

The Executive Director, Attitudinal and Behavioral Change (ABC) Secretariat, Dr. Ivan Ajibola Thomas said he is familiar with the work of the ACC as he had worked at the ACC as on officer and director respectively. Dr. Thomas noted that most of the activities of the ABC were formulated from the ACC.  Maintaining that the signing of the MOU is an epoch making occasion and the partnership between the ACC and ABC Secretariat will help them share the same mission and vision. He affirmed that they are committed in the fight against corruption as they perceived corruption as a behavior that affects development in the country. He informed the audience that there are challenges especially in the work of both institutions in terms of criticisms and apathy. He informed the audience that change is a process; it takes the willingness and the right standing to change the attitudes and behavioral patterns in the society. He advised the Commission to enhance the integrity school approach, outreach meetings both in communities and institutional levels. The synergy of cooperation between the two institutions is not ordinary but very significant as it will capacitate both institutions to work towards good governance and challenge negative behavior in the country, Dr. Thomas concluded.

The Commissioner of the ACC, Joseph Fitzgerald Kamara said both institutions are seen as a common enemy and therefore have a role to end the suffering among the people of Sierra Leone. He informed the audience that the fight against corruption is a national fight and everyone should be part of it. He disclosed that there are three agents of change: the father, mother and the teacher. He stated that in order to effect such strategic partnership, both institutions should work together to formulate joint workshops and design programmes of mutual plan of actions among others. The Commissioner said that there are challenges especially on youth employment, lawlessness and corruption He informed the audience that responsibility for fighting against corruption should not be limited to the two institutions but should be accelerated to citizens as a whole. “The signing of the MOU between both institutions is to strengthen the formularization of mutuality in our work plans in order to protect government resources and build a better society” He concluded.