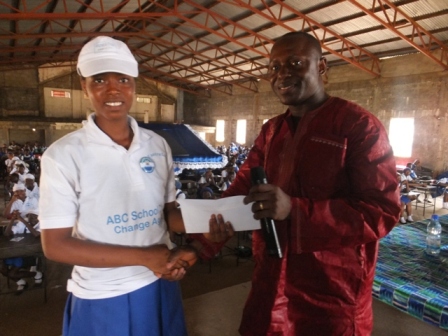 The Attitudinal and Behavioural Change on 25th April inaugurated its ABC School Club members and their executives at the Freetown Secondary School for Girls (FSSG) following the election of the executive members on the 25th march 2014.  (Photo: Programme Manager Ishmael Cole handing the scholarship to Agnes Moseray President FSSG ABC Club)

The formation of the executive and its inauguration came after the school established an ABC Club following the Attitudinal and Behavioural Change (ABC) Secretariat’s training for ABC Pilot Schools which was held on the 11-13th of  February 2014 at the National Stadium Hostel Freetown.

During the program, the Chairman  who represented the Deputy Minister of Information and Communications Mr.Kwame Yanson applauded the effort of the student in taking such ventures after the Pilot School workshop and training, he encouraged them to be good examples as they are now  Peer educators in their schools and Communities.’ ‘As school going pupils, you may have come from different parental backgrounds, but you share similar challenges. You have no control over your age bracket: that is teenagers moving towards adolescence” he went on to say that during that age bracket, they encounter a lot of peer group influence to abuse drugs, indulge in alcohol, sex, truancy in school, gang culture, cultism and all the vices that are unacceptable in society especially coming from school going Children. He informed the pupils that research has proven that only people of similar age bracket, cultural background and social standing can transform the lives of their peers. That is why the ABC Secretariat has trained your colleagues at some point who have shared the same beliefs, eaten the same food and now decided to serve as Change Agents in the school environment and society at large he concluded.

The Principal for the Senior Section of the Freetown Secondary School for Girls Mrs. Bosbson Kamara lured the effort of her pupils in setting up the ABC School Club in her School, and she also thank the focal teachers Mrs. Francess Massalay and Miss Lucia Mambu for organising the Pupils. She told the gathering that she is not surprise for what the pupils did because the teachers working with them were awarded as teachers of the year, and also encouraged the pupils to keep up the pace and pledged their full support to the Secretariat because she is of the strong conviction that positive attitude is the only way forward for this nation.

Mr Horatio Williams Executive Secretary Basic Education Commission representing the Hon. Deputy Minister 1 from the Ministry of Education, Science and Technology in the inauguration Ceremony told the pupils that he was one of the facilitators at the pilot  school workshop  and that ”I was pleased to observe your enthusiasm to imbibe new ideas and willingness to contribute in building positive attitudes in your Peers ,am also pleased to state that the last Inter-Secondary School sports meeting was free from violence of any kind”.

He went on to say that the pupils have shown a clear manifestation of all they received at the training as peer educators in inculcating positive attitudes in their peers. He told them that self-control is the hallmark of self discipline and as agent of change/peer educators; they should never allow anyone to disturb their peace. ”An atmosphere of peaceful coexistence is the foundation for sustainable development, your reward for what you are doing is the joy of seeing your peers developing their talents to the fullest in an environment that is free from all forms of violence, but characterized adherence to the norms and values of human society he concluded”.

The National Coordinator and Second in Command Madam Nanette Thomas encouraged the pupils to keep the pace ,as the FSSG school took the lead in the  workshop and even the Drama which was performed after the training . “This clearly shows that you where listening to the facilitators and I am very proud of you”. She told them they should serve as role models and paragon of good and excellent attitudes and behaviour in the school. ”No more truancy and late coming in school, no more cheating in the examination and other anti-social behaviours within and outside the school” she reiterated. She also encouraged them to take part in radio discussion programmes so as to support and promote positive attitudes and behaviour.  She stressed  that children understand themselves when they talk to each other than when adults talk to them.

The Programme Manager Mr. Ishmael Cole thank the pupils for their performance during the workshop and for been the first school to organise themselves to form the ABC School Club.”

Cross Section of the FSSG pupils

The ABC usually encouraged the most brilliant pupil during every Pilot School Workshop by giving him/her a year scholarship.  We’ve done this in other regions he said. During the Western Area pilot school workshop, Agnes Moseray has worn the scholarship.  During the inauguration, the Programme Manager called her forward to collect her scholarship. The programme ended with a vote of thanks which was done by the president Agnes Moseray, in which she pledged her commitment on behalf of her colleagues to the ABC Secretariat Staff.

How prawns are saving lives in Sen...