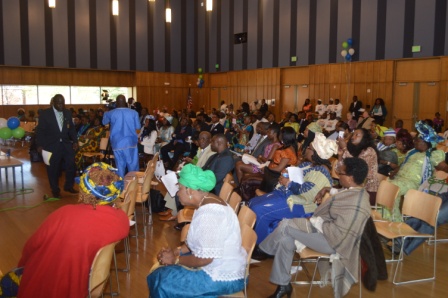 The ceremony which was slightly different from the usual wining and dining, took a different turn this year, by it becoming more Sierra Leonean and academic.

It was a symposium characterized by brain storming, to chart a way whereby Sierra Leoneans living in the diaspora can meaningfully contribute towards the ongoing transformation and continuous positive development of the country.

The more than 250 attendees were later divided into three groups according to topics, followed by a plenary session and reporting from groups.

Another view of attendees at the Civic Center Auditorium

“This is a fulfilment of a promise he earlier made as President of the Republic of Sierra Leone. “President Koroma has also commissioned a newly constructed modern tarmac road (Regent – Grafton Road) a stretch of road that takes a driver from the west end through Wilberforce – Hill Station to Regent and lands him/her in Grafton in the east of the city.

Ambassador Stevens said President Ernest Bai Koroma is held in high esteem by his colleague Heads of State and the President of the USA. To justify this, Ambassador Bockari Stevens read out some paragraphs of Mr. John Kerry, Secretary of State’s congratulatory message to Sierra Leone on the Country’s 53rd National Day.

“We are all profoundly aware that Sierra Leone is becoming one of Africa’s greatest success stories.

“When I was Senator from Massachusetts, the suffering of Sierra Leone was not just an issue on the Foreign Relations Committee; it became personal because my state became a haven to so many Sierra Leoneans fleeing violence and grievous wounds.”

“I came to know children who had lost parents and parents who had carried on after losing their children. They dreamed of a day when their home would be peaceful again.”

“Today, that is much more than a dream. “Sierra Leone is a model post-conflict country. Although so many lost so much during the civil war, we have proudly witnessed how Sierra Leoneans summoned the will to pick themselves up and rebuild their country.”

“We are pleased to continue helping train and equip Sierra Leone’s own troops. Sierra Leoneans are not just beneficiaries of peace.”

“They are performing admirably as contributors to peace and security not just across the region, but around the world.”

“There are still miles to go to build durable, democratic institutions, provide services, and improve governance. But Sierra Leoneans will not face these challenges alone.”

“The United States remains deeply invested in peace and stability in Sierra Leone and will continue to lend its support.”

“On this historic occasion, we celebrate Sierra Leone’s progress and its promise for the future.  I offer best wishes for a safe and joyous holiday.” Ambassador Stevens.

Several other Speakers including the Hon. Mabinty Daramy Deputy Minister of Finance spoke on the current development of the country and said, the Government is not 100% there yet. Similarly, other distinguished personalities spoke on the history, development and challenges of the government.

Distribution of Awards to Ambassador Bockari Stevens by the Sierra Leonean Community for his outstanding quality  as a unifying force, and  Ms. Nadia Bangura the longest serving Confidential Secretary for her competence and high skilled in performing her duties – formed the high point of the occasion.