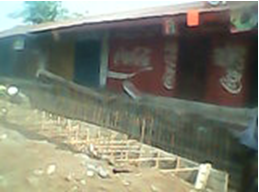 Working under pressure in the ongoing road construction project in Makeni, northern Sierra Leone,  a tragedy erupted barely two months ago, leaving about three shopkeepers seriously injured, hospitalized for weeks and further halted the immediate closure of about five shops on the long building.  (Photo: A view of the destruction on No1. Kojo Street in the city center of Makeni)

The unfortunate and continuous tragedy occurred at Kojo Street in the heart of the northern city, where some officials of the Sierra Leone Roads Authority (SLRA) are alleged to have taken bribe from a Lebanese tycoon to niftily divert the possible flow of highly deposited water from almost all corners of the Community in that part of the country, devoid of the yearly flooding damages on shop-goods, property and dwellings.

The Lebanese tycoon (Zayat) owns the storey building on 29 Rogbane Road in the city center of Makeni. But the building is believed to have wrongly been erected on the main water passage  through the city center. Experts are said to have long suggested its demolition, but to no avail.

And residents perceived that bulks of local authorities in collaboration with some SLRA Engineers have been part of the allege conspiracy to by all means; protect the house of the Lebanese tycoon from possible demolition  to allowing free flow of water during  tense and heavy rain falls.

The said cause of the tragedy on the long building containing nine shops on No.1 Kojo Street in Makeni was as a result of a very deep gutter dug by the contracted companies. The deep gutter is allegedly meant to bypass the encroached storey building from demolition.

The nearly 9-14ft deep and about 9ft wide gutter is put on a swampy terrain. And it is also believed to have been dug very close to private owned structures. But earlier in the cause of the digging of the gutter nearly two months ago; about five shops on the nine long shop-building were affected after half of the lintel on the frontage of the building collapsed. It severely injured the three shopkeepers on No.1 Kojo Street in Makeni. Since then, no authority neither the company have claimed responsibility nor extend sympathy to the victims, a family has lambasted.

However, as we fast delve into the rainy season, about three rainfalls have in the couple of days; aggravated further destruction on the same building. Rainfall on past Wednesday lasted for nearly forty munities. The following Thursday, destruction on the same shop-building on 1 Kojo Street intensified, demanding the immediate closure of all shops on the building. Multidimensional tragedies on the whole building and its immediate are expected after one/two rainfalls if a quick solution is not put in place, Abu Bakarr Kanu worriedly suggested.

Nearby residents and traders have expressed worries and concerns. And as it is, some of the shopkeepers have become frightened to removing their goods from the unsafe building. And bulks of the Community residents are getting angry day by day, as the damages proceed.

The concerned residents say they want the immediate intervention and investigation of concerned authorities on what is perceived as shady deal. More so, the very many allegations of palm-rubbing with some local stakeholders, the Zayat and few SLRA Engineers to diverting  the heavy water flow that is highly deposited from almost every corner of the community. And unconfirmed allegation say, about one-hundred million Leones has been dished by the Zayat family to secure the building. And the allegation is yet to be confirmed.

Meanwhile, the three injured shopkeepers have not been compensated for the injuries and damages they suffered. And highly dissatisfied is a relative of one of the victims. He condemned what he called; the authorities’ carpeted quietness as unfair and inhumane. He argued that these traders have long involved on what he called, micro-credit loans which he said; they will have to pay back without further excuses. “How can they cope with these uncompromised payment conditions after they have been hospitalized and have not been doing business over the while”, the Law student discharged.

Seeming to work under pressure in an ongoing road construction project, some Sierra Leone Roads Authority (SLRA) officials have been accused of taking bribe for a Lebanese tycoon to niftily divert the possible water-flow across Rogbane Road, Makeni, north eastern Sierra Leone. The flooding is used to reaking serious havoc.

Center for the Promotion of Inclus...

Africa flies on a wing and a praye...