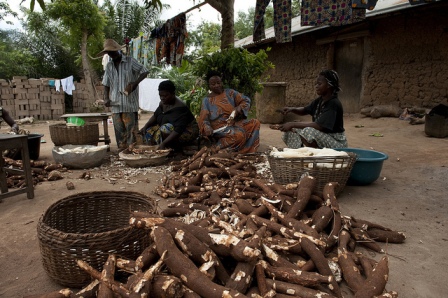 Do land, seeds and crops have a gender? Perhaps they do in sub-Saharan Africa, where women produce up to 80% of foodstuffs for household consumption and sale in local markets, according to a report by the World Bank and the Food and Agriculture Organization (FAO). For crops such as rice, wheat and maize, make up about 90% of food consumed by rural dwellers, it is women who mostly sow the seeds, do the weeding, cultivate and harvest the crops and sell surpluses.

And for secondary crops such as legumes and vegetables, says the FAO, “Women’s contribution…is even greater,” adding that it’s as if only women are involved in producing these crops. What’s more, they make and tend the gardens that provide much-needed nutritional and economic well-being.

While women farmers are essentially feeding the continent, they have remained largely in the background, calling little attention to themselves and receiving little help. But this situation is changing as they spearhead efforts to transform Africa’s agricultural landscape. Take for example Grace Kamotho, a lecturer at Karatina University in Nairobi, Kenya, where she also trains farmers in new farming technologies and practices that lead to higher productivity. “Being an African woman,” she told Africa Renewal, “I recognize the fact that women are more associated with food preparation and care of the family than men, and I understand the importance of feeding families with appropriate and balanced diet.”

Ms. Kamotho recently participated in a training workshop on vegetable production in greenhouses, at Volcanic Institute’s Centre for Agricultural Development and Cooperation in Israel. Here she gained knowledge about seed and vegetable seedling cultivation, among other subjects. She said the training’s focus on vegetables was necessary because in rural Africa, vegetables supplement meals of maize, rice, potato, cassava or yam, and are a good source of proteins.

“Women tend to shop or procure food for their families, which in some cases means growing it in kitchen gardens,” she says. But women farmers go beyond tilling the soil: they also ensure prudent food management—deciding what to keep for the household and what to sell. “When a drought or economic crisis hits, women feel the pinch most, as they have to find ways to provide for their families,” says Ms. Kamotho.

Despite the role and impact of women in African agriculture, there’s still an unsettling disparity in the support they receive compared to men. A World Bank report states that in Nigeria, for example, while women constitute about 60% to 80% of the agricultural work force, men generally make key farm management decisions. “As a result, agricultural extension services throughout the country have traditionally focused on men and their production needs.”

In their book Transforming Gender Relations in Agriculture in Sub-Saharan Africa: Promising Approaches, authors Marion S. Davis, Cathy Farworth and Melinda Sundell argue that women’s productivity is lower than that of men because they have limited access to resources such as land, credit and other production inputs. In an interview with IRIN, a UN humanitarian news service, Ms. Sundel said that in Kenya, the value of female farmers’ tools was about one fifth that of their male counterparts’.

Credit is undoubtedly necessary to acquire land, machinery, fertilizers, irrigation and high-quality seeds, and to hire labour. Moreover, when women’s access to finance is restricted in comparison to men’s, it creates a power imbalance that affects women’s ability to negotiate their role within households, according to the International Center for Research on Women (ICRW). Some banks set up roadblocks to getting the necessary capital, such as the need for a male guarantor or the requirement that a beneficiary must be literate, notes the World Bank in its 2009 Gender in Agriculture Resource Book. Makhtar Diop, the World Bank vice-president for Africa, warns that “the status quo is unacceptable and must change so that all Africans can benefit from their land.”

The ICRW believes that women farmers who own property and have access to finance will have greater bargaining authority and control over their incomes. In addition, studies show that women are more likely than men to spend their incomes on their families’ food, education and health. Lawson Lartego Late, director of the economic development unit at Care USA, a humanitarian organization, told the US magazine Forbes that “when it comes to finance, we need to apply a gender lens. When you look at how people get access to financial services, especially here in Africa, agriculture is underserved.”

The UN and other non-governmental organizations are investigating and implementing projects that provide greater access to micro-credit for women farmers. The Hunger Project (THP), a US-based international NGO with offices across the world, has created a micro-finance programme that involves giving training, financial advice and credit to African female farmers. THP has to date loaned about $2.9 million to women farmers in Benin, Burkina Faso, Ethiopia, Ghana, Malawi, Mozambique, Senegal and Uganda. As a result, beneficiaries raised their production levels.

Soro Yiriwaso, another micro-finance institution based in Mali, supports women in the southern part of the country in boosting food security. Women represent 93.5% of Soro Yiriwaso’s borrowers, while two thirds of its loan portfolio goes to agriculture. Between 2010 and 2012, under its Prêt de campagne scheme, the institution gave agricultural loans to women members of recognized cooperatives in 90 villages at the start of the planting season. These loans are repaid with interest after harvest.

African leaders have also pledged to help women farmers under the 2003 Maputo Declaration (the Comprehensive Africa Agricultural Development Programme), which is intended to increase support for smallholder farmers. ActionAid, an international aid agency, has urged these leaders to fulfil that pledge lest farmers be unable to maintain the fight against hunger. “If women are given equal access to land, seeds, as their male counterparts, we can reduce hunger in the world by 140 million people, which is about 17% of people who are living hungry.”

One reason African women are largely excluded from decision-making in their homes and communities, and underrepresented in leadership roles, is their high rate of illiteracy. But according to the Swedish Agricultural International Network Initiative (SAINI), when women are given the chance, the farms they run perform just as well as those headed by men—or even better.

In a study of western Kenya, SAINI found that female-headed households had agricultural yields that were 23% lower than those of male-headed households, and attributed the difference to less secure access to land and lower educational levels. A male farmer from Zambia told SAINI that “there were men who have died and left their spouses and children. Their farms are still functioning and are even better after their deaths. This is because the women were involved in planning and decision-making.”

Fortunately, the future is bright for women farmers. They are benefiting from more training opportunities, incentives and other programmes designed to equip small-scale women farmers with information, skills and other inputs to improve crop quality and quantity. For example, in the Mbeya region of Tanzania, the Bill and Melinda Gates Foundation is providing women farmers with agronomy training that addresses gender-related norms and attitudes that discourage them from engaging in coffee production. These farmers learn how to improve coffee quality and quantity, which in turn increases their incomes.

The Alliance for a Green Revolution in Africa (AGRA), an organization that promotes the productivity and livelihoods of smallholder farmers, has teamed up with Tanzania’s agriculture ministry to launch the Integrated Soil Fertility Management programme to promote improved soil health through intercropping cereals with legumes. Under this programme, women receive information on soil fertility through community radios, mobile phones and agriculture extension workers.

Any transformation in Africa’s agriculture will depend on women’s participation. “Investing in women’s economic empowerment is a high-yield investment, with multiplier effects on productivity, efficiency and inclusive growth for the continent,” says Kathleen Lay from ONE, an organization campaigning to end global poverty. The International Fertilizer Development Center, an organization that focuses on enhancing agricultural productivity in developing countries, puts it succinctly: “The African farmer is primarily a woman farmer. And she is a good farmer who can feed her family and her continent if she is given the tools and the opportunities to do so.”