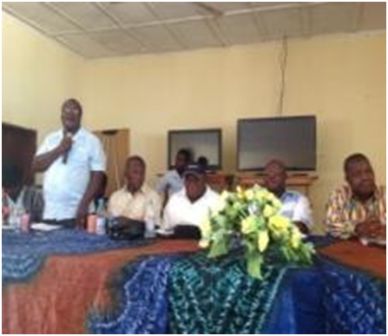 Magburaka, April 1(SLENA) -Member of Parliament of Constituency 066, Hon. Dr. Taworu Tara Koroma, disclosed over the weekend that as part of its corporate social responsibility, the African Minerals Limited (AML) has paid the total sum of Le1,890,671,600 as surface rent in three chiefdoms in the Tonkolili District and one chiefdom in Koinadugu District.   (Photo: Hon. Taworo commending AML for a job well done )

Addressing the beneficiaries at the Tonkolili District Council headquarters in Magburaka, Hon. Dr. Taworo Koroma noted that the money has been made available through various interventions by stakeholders and commended the Ministry of Mines and the Parliamentary Oversight Committee in Parliament who helped in making sure that the beneficiaries received what was due them.

While warning the beneficiaries to stop protesting as in the past, the MP urged other line MDAs to monitor the payments and give detail account after the paying exercise.

The Chairman of the Parliamentary Oversight Committee on mines and minerals, Hon. Amadu Kanu commended African Minerals Limited for promoting the interest of the country.

He commended President Koroma for putting policies in place to monitor the mines sector, noting that the Mines and Minerals Policy Act of 2009 has set the pace for all mining companies to adhere to their cooperate social responsibility.

He said parliament and other line agencies will continue to monitor the activities of the company as part their parliamentary responsibility.

The Deputy Minister of Mines and Minerals, Hon. Abdul Ignosi Koroma also commended the AML, noting that the surface rent was to cover the past two years in which 50 percent of the money went to land owners, 15 percent to Paramount Chiefs 15 percent to District Councils and 10 percent to constituency development fund.

He said since the government of President Koroma believes in transparency and accountability, he urged the beneficiaries to sign and give receipt to show that they have received their money   as part of international best practices.

The Minister of Education, Dr Minkilu Bah commended AML for helping to promote education in the country and touched on the good things AML has been doing in the Tonkolil District more particularly in supporting the Trade Center Vocational Institute in Magboraka as well as well as the technology university that will be opened soon and to be supported by AML and other partners.

Also speaking at the ceremony was the Deputy Minister of Local Government and Rural Development whiles Lawyer Kweku Lisk represented African minerals at the ceremony.

Chiefs, land owners and members of parliament praised AML and admonished the company to be paying surface rent yearly to avoid misconception from the community.