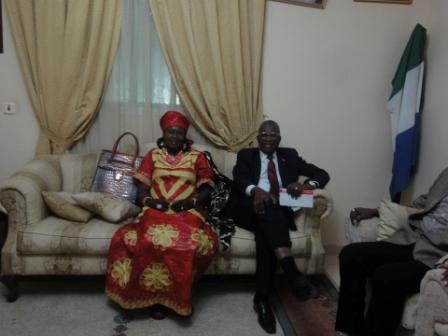 In an unprecedented national move, the Sierra Leone Embassy in Riyadh, led by the Minister Counsellor/Head of Chancery, Umaru S. Dura and its nationals received His Excellency, President Dr. Ernest Bai Koroma’s new envoy to the Kingdom of Saudi Arabia at the King Khaled International Airport in the early hours of Saturday, 29th March, 2014.  (Photo: Ambassador Kargo and his spouse on arrival in Saudi Arabia)

The massive warm welcome accorded to Alhaji Mohamed Sillah Kargbo, according to the first President of the Sierra Leone Nationals’ Union, Ibrahim Sillah, was the first of its kind since the Embassy of Sierra Leone was established in Saudi Arabia in 1979.

As a long dwelling Sierra Leone national in the Kingdom,  Sillah said: “I have almost certainly seen all his predecessors come and go, but never before had anyone of them been so massively welcomed on his arrival by the nationals.”

On his part, Chairman of the All People’s Congress (APC) party, Saudi Arabia and the Gulf States, Unisa Kanu, the welcoming of the ambassador itself was hugely symbolic in both attendance and significance, adding that, “it notably captured the active participation of all the major players in our small community in Riyadh.”

Amb. Kargbo in warm handshake with his nationals at the airport

However, there should be no wonder as to why the new envoy was accorded such a warm and cordial welcome. As a matter of fact, Ambassador M.S Kargbo is the man who did not need to be introduced to our nationals; for through his interactions with them in the past four years as a leading figure in the National Hajj Coordinating Committee that annually organizes the pilgrimage to Makkah, he has come to know most of his nationals by their names.

Therefore, it came as no surprise to see such an unprecedented level of attendance or show of support and patriotism coming from nationals of all works of life who made it a point of duty to be at the airport to receive the newly appointed envoy.

By and large, Sierra Leoneans resident in the Kingdom are highly hopeful that the new envoy would succeed in his new mission and would make a difference as far as their general welfare is concerned; for through the years of his interactions with Sierra Leoneans during the period of Hajj he has indeed proven to have the national interest at heart.

In an interview after receiving the ambassador, speaker after speaker wished  Ambassador M.S. Kargbo every success in his duty tour as His Excellency’s new envoy to the Kingdom of Saudi Arabia, full of rewarding achievements, and marked by the continuous strengthening of our country’s bilateral relations the host country.

Before his appointment as Ambassador, Kargbo was the Special Assistant to His Excellency the President on Political Affairs and National Organising Secretary of the governing All People’s Congress party.

Traders Union on hygiene and safet... 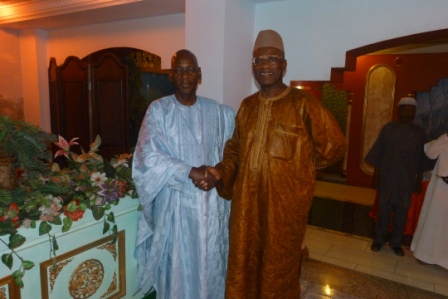 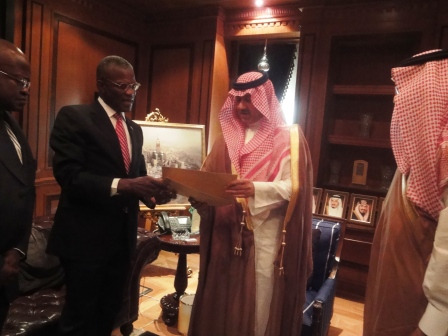