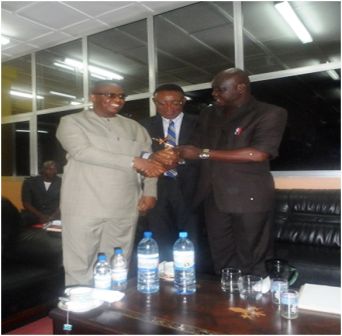 WAEC is holding its 62nd Regional Conference in Sierra Leone at the Bintumani Hotel in Freetown, and Mayor Gibson was speaking during a courtesy visit of regional delegates of the examination body in his Parlour at the Freetown City Council, Wallace Johnson Street, Freetown.

The Mayor noted that the visiting delegates must have learnt a lot from history about Sierra Leone and its capital city, Freetown; and assured them that the on-going conference is going to be successful as the city is one of the safest in the world.

He informed the delegates that Sierra Leone was referred to as the Athens of West Africa in terms of education because the first University in West Africa, Fourah Bay College (FBC), was built in Freetown. And what was interesting, he said, was that the country has a University in 1827 before a Secondary School called The Sierra Leone Grammar School in 1845.

“Many people from other countries gained higher education at FBC in Freetown and they have also gone on to hold notable and responsible positions in their respective countries and other places of work,” the Mayor recalled.

He implored WAEC to continue their good work as quality education is the key to a successful life, and the development of a nation.

Speaking on behalf of the delegates, the National Head of WAEC Sierra Leone, Mohamed Sheriff Sapateh, expressed appreciation to the Mayor for his warm welcome.  He said since the Mayor was voted into office he has been manifesting his desire and effort to improve the educational standard in the Municipality. He said it was therefore necessary to visit the Mayor and formally invite him to be part of the 62nd annual conference.

Chairman of WAEC in Nigeria, Pro. PAI Obanya, informed the Mayor that the regional examination body has contributed a lot to ensure quality education in West Africa and in this vein they are looking for more grounds to seek more funds and Human Resources to ensure that their services are effective to match up with global standards.

Meanwhile, in an interview with the Permanent Secretary of the Ministry of Education, Science and Technology, Mani Koroma, he said President Koroma has also given his support towards the conference.

The 56nd conference was also held in Sierra Leone in 2009.