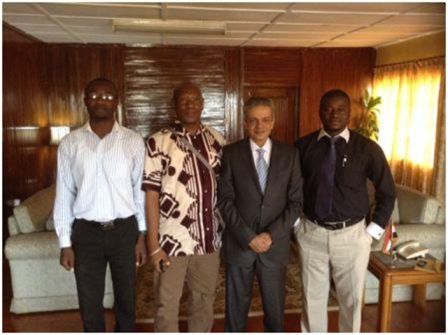 MONDAY 10TH MARCH 2014: The Executive of the Sierra Leone Association of Journalists (SLAJ) continues its lobbying of key stakeholders and foreign missions for the repeal of the criminal and seditious libel laws and for specialized and professional training opportunities for journalists with a visit today to the Egyptian Embassy in Freetown where the Ambassador, Amr A. Moussa, expressed his mission’s commitment to help Sierra Leonean journalists develop professionally.  (Photo: Egypt’s Ambassador to Sierra Leone, Amr Moussa, poses with a cross section of the SLAJ Executive)

Ambassador Moussa said he was grateful to the SLAJ Executive for the visit and for sharing the Association’s plans and aspirations with the Embassy. He promised that Sierra Leonean journalists will be considered for training opportunities the Egyptian Government will be offering to journalists across the African region.

“Building capacity and training of officials in all sectors is central to the work of the Embassy,” said Ambassador Moussa. “The Embassy will seriously consider offering training opportunities to Sierra Leonean journalists so that they can improve on their professional skills.”

The diplomat said it was a privilege for him to work in Sierra Leone, which he described as having “beautiful scenery with hospitable people”.

“With huge natural resources, development can make the difference. Not all countries have such virtues,” he said and added: “The future of Africa is for countries like Sierra Leone – a small country with peaceful people. All that is needed is better education.”

Ambassador Moussa said Sierra Leone and Egypt have always enjoyed good bilateral relations and that even during the height of the Sierra Leone civil war, Egypt did not shut down its embassy in Freetown, a development he said demonstrated that “we believe in Sierra Leone”.

Speaking earlier, SLAJ President, Kelvin Lewis, said the Association has always enjoyed an excellent relationship with the Egyptian Embassy over the years, a bond he said his Executive was determined to foster.

“Before the disturbances in Egypt, the Embassy had been offering training opportunities for local journalists to be trained in Egypt. We want this to continue because a good number of our colleagues need capacity building, especially in certain specialised areas of reporting,” said Mr. Lewis.

With the discovery of oil in the country, and with the process moving from exploration to extraction, the SLAJ President expressed the need for journalists to acquire the necessary skills that will enable them report, from an informed point of view, on the emerging oil industry.

“Our journalists have very limited knowledge on issues regarding the emerging oil industry in the country. To be able to report accurately on these issues, they need the knowledge, otherwise they cannot educate or inform the public on what is going on in the industry,” noted Mr. Lewis. “SLAJ would welcome experts in this field to talk to our journalists and give them the necessary skills to report on issues around the industry.”

Moreover, the SLAJ President used the occasion to appeal to the Egyptian Government, through the Ambassador, for the release of journalists it is currently having under its custody on charges of practicing illegally, among others.

In his response, Ambassador Moussa said the journalists, whom he said were foreign and not Egyptian journalists, were not accused or detained on freedom of expression issues, but for “practicing without licenses” and for other “criminal activities”.

On the request for specialised training, Ambassador Moussa said the Embassy would consider bringing in a Professor who could give a lecture at the engineering department in the University and also on the side talk to journalists on issues about the oil industry.

He also promised to arrange a visit by some Sierra Leonean journalists to major newspapers in Egypt to share ideas on how the media works in both countries. This, he said, will be facilitated after the elections in Egypt.

Meanwhile, the SLAJ Executive last Friday paid a courtesy call on the British High Commissioner, Peter West, to drum-up support for the repeal of the criminal and seditious libel laws and for scholarships for journalists to pursue higher academic courses.