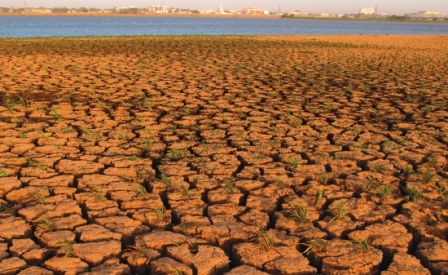 Climate change comes with never-before-experienced impacts. For example, crop yields and growing seasons will decrease even as changing rain patterns will worsen people’s access to water. Yet Africa’s population is projected to reach 2 billion in less than 37 years, and in 86 years three out of every four people added to the planet will be African.   (Photo: Parched soil by the White Nile in Khartoum, Sudan.  World Bank – Arne Hoe)

Decreasing crop yields and increasing population will put additional pressure on an already fragile food production system. That is why experts have warned that if the current situation persists, Africa will be fulfilling only 13% of its food needs by 2050. This situation will further threaten about 65% of African workers who depend on agriculture for their livelihoods including children and the elderly, who are particularly vulnerable to food insecurity.

Hunger already affects about 240 million Africans daily. By 2050, even a change of about 1.2 to 1.9 degrees Celsius will have increased the number of the continent’s undernourished by 25% to 95% (central Africa +25%, East Africa +50%, Southern Africa +85% and West Africa +95%). The situation will be dire for children who need proper nourishment to succeed in their education. The Economic Commission for Africa (ECA) has estimated that African countries could lose between 2% and 16% of gross domestic product due to stunting of children as a result of malnutrition.

Changes in climate such as higher temperatures and reduced water supplies, along with other factors like biodiversity loss and ecosystems degradation, affect agriculture. According to Science, a leading international research journal, by 2030 Southern Africa and South Asia will be the two regions in the world whose crop production is most affected by climate change. For example, while wheat varieties grow well in temperatures between 15 and 20 C, in sub-Saharan Africa the average annual temperature currently exceeds this mark during the growing season. Therefore, if current climate trends continue, by 2030 wheat production is likely to decline by 10% to 20% from 1998–2002 yields.

Food insecurity will likely lead to social unrest, as has been the case in the past. For example, between 2007 and 2008, riots took place in many countries when prices of staples peaked. In 2010, hundreds of protesters took to the streets in Mozambique after wheat prices went up by 25% due to a global wheat shortage caused in part by wheat-crop-destroying wildfires from record heats in Russia). The increase in bread prices led to fires, violence, looting and even deaths.

Fears extend beyond wheat scarcity. The Africa Adaptation Gap Report by the UN Environment Programme, the UN organ responsible for promoting sustainable use of the environment, confirmed the World Bank’s recent findings that with warming of about 2 degrees C, all crop yields across sub-Saharan Africa will decrease by 10% by the 2050s; greater warming (which is more likely) will cause crop yields to decrease by up to 15% or 20%.

Further bad news for African agriculture is that by the middle of this century, wheat production could decrease by 17%, maize production by 5%, sorghum production by 15% and millet production by 10%. Additionally, if climate warming exceeds 3 degrees C, all present-day cropping areas for maize, millet and sorghum will be unsuitable for those crops. The question becomes, is Africa’s agricultural system ready to respond?

Increasing crop production amidst climate change has been done before, and analysts believe that African countries need to incorporate this knowledge in their planning. They will also need to protect and fortify their water resources, which are critical to food security.

In the coming years, water for agriculture will be stretched to a painful extent. In Africa, 95% of agriculture relies on rainfall for water, according to the United Nations Environment Programme (UNEP). The World Bank notes it is very likely that by 2020 the total availability of blue and green water (from rains and rivers) in all of Africa could decline by more than 10%. In addition, climate change threatens biodiversity and ecosystems, which are the foundation of agriculture. Biodiversity losses and ecosystem degradation will affect the quality of the soil and the vegetation upon which livestock depends, states the World Bank, adding that potential reductions in water, biodiversity and crops should compel Africa to pay closer attention to its current food system. In short, Africa needs an approach that works with nature, not against it.

New machines also mean fewer hands, which may increase joblessness while reducing wages, affecting many who depend on agriculture. Because current practices cannot meet future demands, Africa must apply new and better approaches.

In July 2013, African leaders made an ambitious pledge to end hunger by 2025. They mean to do this by encouraging farmers to move away from cash crops, fragile cropping systems and heavily fertilizer- and pesticide-dependent systems and to adopt sustainable and climate-resilient practices. Nutrient depletion alone accounts for $1 billion to $3 billion per year in natural capital losses, according to findings by the New Partnership for Africa’s Development (NEPAD).

Unlocking Africa’s potential requires that policy makers in agriculture and the environment join forces with civil society and non-governmental organizations to consider options that will enable the environment and farmers to cope with climate change. One of the options being advocated is the ecosystem-based adaptation,, which is to mitigate climate change impact through the use natural systems such as drought-resistant varieties, more efficient methods of water storage and more diversity in crop rotation, says UNEP.

In Zambia, 61% of farmers who applied an ecosystem-based adaptation, such as natural resource conservation or sustainable organic agricultural practices, reported surplus yields. Some yields even increased by up to 60%, while sales of surplus crops grew from 25.9% to 69%. In Burkina Faso, farmers are using indigenous methods to rehabilitate land. By digging small pits (locally referred to as zaï) on barren plots and filling them with organic matter, some Burkinabe farmers are able to add nutrients to the soil while enhancing groundwater storage to improve crop productivity. These farmers have reclaimed 200,000 to 300,000 hectares of degraded lands and have produced an estimated 80,000 to 120,000 additional tonnes of cereal.

Other options include protecting watersheds and reinforcing their capacity to hold water and carry it to those who need it most; using integrated pest management, which is a natural and cost-effective way of protecting crops; using agroforestry, intercropping and crop rotation, which bring nutrient diversity to fields and ensure continued and improved production yields in a natural way; maintaining forests and using forest foods; using natural fertilizers like manure; and using natural pollinators like bees, which, according to a recent study, could increase fruit yields by 5%. These alternatives are cost-effective: the project in Zambia cost only $207 per person. Similar projects in Uganda and Mozambique cost just $14 and $120 per person, respectively.

A ray of hope

The most pessimistic forecast about the impact of climate change suggests that Africa may lose 47% of agricultural revenue by 2100, while the most optimistic predicts a loss of only 6%. The latter scenario depends on the assumption that climate change adaptation practices and infrastructure are already in place. But the difference between 6% and 47% is huge, which itself is a strong argument for investment in adaptations that will unlock Africa’s vast natural resources. Analysts believe that if Africa is to fortify agriculture and curb hunger, it will need to work with the natural environment, making it more resilient and productive under climate change.

The changing climate does not have to mean greater food insecurity in Africa. Many communities across the continent are already building resilience by stimulating their existing ecosystems and available natural resource bases. Building on such good practices, and properly managing the unavoidable effects of climate change, will unlock Africa’s potential to feed itself. The future need not be a future of want.

By Richard Munang and Jesica Andrews, Courtesy of Africa Renewal

Are the Sierra Leone Parliament an...

APC MP on construction projects in...