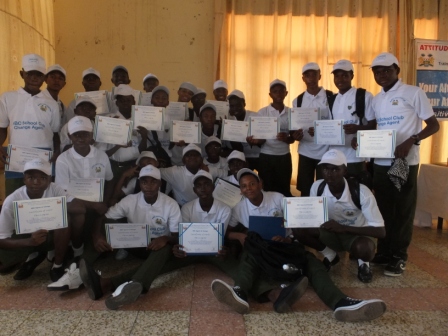 The Attitudinal and Behavioural Changes (ABC) Secretariat has launched an Agent of Change Pilot School Project for secondary school in the Western Area after a two day training at the Atlantic Hall National Stadium on the Thursday, February 13, 2014.  Prince of Wales students displaying their certificates of merit after the training

The project was launched by the Deputy Vice Chancellor of Fourah Bay College University of Sierra Leone Professor Sahr Gbamanja.  In launching the project; the professor admonished the pupils to inculcate the culture of positive attitudes and behaviours.

Professor Sahr Gbamanja told the pupils to get rid of those negative clubs within their Schools, “ABC clubs are the best Clubs that you should have in your schools” he said to them, adding that the ABC clubs will help them to be very positive in life.

Adding that many pupils do not know their roles which is a clear manifestation of negative effect, they inturn mistake their role for the ones that teachers should in their various schools.

He said as an agent of Change, the pupils should be the role models to their colleagues by doing the right things. He told them to be committed and dedicated to their studies, noting that if they did not pass the Basic Education Certificate Examination they won’t also be able to pass the West Africa Senior Secondary Certificate Examination too; he further on encouraged them to put on a positive attitude so that they will succeed in life.

The Vice Chancellor advised the pupils to identify their gift or talent and work toward their dreams, “if you want to be a Lawyer, go in for it with a very good attitude so you can succeed in life” he said, encourage them to serve as counselors to their colleagues when they go to their schools, adding that they should stand in the faces of their colleagues and say the truth and preach the attitudinal messages that they learnt for a better sierra Leone.

Mr. Horatio Williams, who represented the Chief Education Officer from the Ministry of Education Science and Technology reiterated that “Prosperity is certainly not the portion of the lazy person”, saying that one would not just sit and want to prosper, adding that all the countries that have developed are hard working, “Sierra Leone will only prosper if we are hard working” he emphasized.

Mr. Nelson-Williams told the pupils that they now have all the time given to them to develop themselves; he encouraged them to make use of their good time as Sierra Leone needs competent professionals to drive home development as prosperity is based on patriotism, hard work, discipline, innovation and research.

He also mentioned that teachers have a pivotal role in molding the characters and behaviors of pupils to make them become developers. And that the altitudes of pupils depend on attitude. Adding that they need to spread the ABC messages to all the schools in the country to make them grow.

Mr. Davidson Kuyateh, the Secretary General Sierra Leone Teachers Union, thank the ABC for organizing such a wonderful programme to help shape the attitudes and behavior of pupils as future leaders of Sierra Leone, adding that there is a connection between the ABC and the Agenda for Prosperity.

He furthered  stated that we have a lot to do to improve Sierra Leone as we all have a role to play in making Sierra Leone a better place. He told the pupils that Attitude is the key to success; he thanked the ABC for the venture taken to capture the minds of pupils towards positive attitude and behavior adding that ABC is in the right direction.

“Sierra Leone will not grow if we do not have good attitude,” he said, while congratulating the ABC for organizing such a wonderful training, Mr. Kuyateh also lauded the pupils for attending the training. He also registered the SLTU’s commitment to the ABC.

Mr. Fred Caulker, representative of the Conference of Principals, in his statement told the pupils that their ability can take them to the top, but it is only their attitude that can keep them there. He pleaded with the pupils to inculcate what they have learnt and to make sure that they change the pupils around them.

He added that the attitude and behaviors are formed by direct contact with others and experience, he said that proper attitude and behavior of the pupils need to be enforced from the homes to their school. He said it is for this reason that the principals of school have decided to work with the ABC Secretariat.

Mr. Alhaji Savage President of the Parent Teachers Association of the Prince of Wales Secondary School told the people to desist from negative attitudes and behaviors for their success, and that they are all liable to change except only God and fool that don’t change.

He furthered stated that all the lectures on attitudes and behavior are in place as they would be of great help to mould the pupils to a way that the country would benefit. He added that, the poor performance of pupils in public examination is not only as a result of the attitudes of the pupils towards their education but also their parents and their schools.

Mr. Stephen Douglas, the Canadian Representative in Sierra Leone called the pupils to choose their role models in life that they would emulate and look up to as they grow, he went on congratulating the ABC Secretariat for organizing the training for the pupils.

After the launching, the pupil participants were awarded with certificates as a showcase of the valuable two days training that they went through to steer them to encourage their colleagues to be part of the Attitudinal and Behavioural Change (ABC) Secretariat’s relentless effort to help shape the attitudes and behavior of Sierra Leoneans for a better Sierra Leone

The launching was ended by a vote of thanks by the National Coordinator and Second in Command Madam Nanette Thomas.