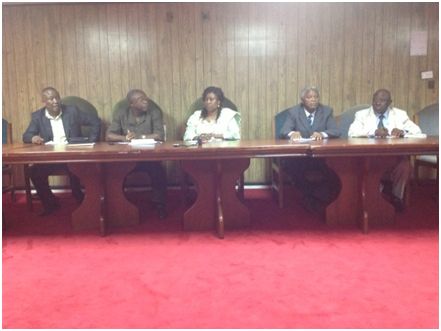 Freetown, Jan. 29 (SLENA) – At a press conference organized by the twenty-six petitioners of Members of Parliament of the opposition Sierra Leone Peoples Party (SLPP) have reiterated that, among other things, they remain firm the party’s decision to remove their current minority leader, Hon. Dr. Bernadette Lahai and to be replaced by Hon. Emma Kowa of Bo District.  (Photo: Some of the petitioners on the high table)

Addressing journalists in Committee Room No. 1 in parliament, one of the petitioners, Hon. Habib Munda of Constituency 17, Kenema District, said due to the concern raised by the 26 Members of Parliament of the Sierra Leone People’s Party (26 out 42 members) they have decided to hold a press conference to present to the public the current unfortunate impasse regarding the removal of their minority leader in Parliament.

Hon Habib said before the closure of the first session of the present parliament in December 2013, majority of the membership of the party examined the petition and deliberated on it  and a decision was reached withdrawing the leadership of Hon. Dr. Bernadette Lahai and a replacement made in the person of Hon. Emma Kowa.

Hon Habib informed journalists that Hon. Bernadette Lahai still poses as the Minority Leader thereby inhibiting the smooth functioning of the opposition in Parliament, stating that they stood firmly by the party’s decision. “And we will continue to do so until it is established in parliament,” he concluded.

Questions and answers formed part of the press conference.

Ngoma Africa Band brings it with ‘...