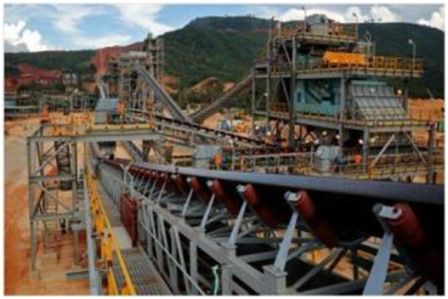 African Minerals (AML), an operator of the Tonkolili iron ore mine in Sierra Leone, has said its sales for the financial year 2013 surged to 12.1 million tonnes (Mt) from 4.1 Mt last year.

Sales during the last three months of last year reached 3.8Mt, higher than 2.8Mt recorded in the sequential third quarter, according to RTTNews, an Internet-based newswire service and content creation business based in New York.

On January 10, 2014 the companies announced the good news and confirmed that production level was also achieved for that calendar year. Exports for the quarter reached an all-time high, with 22 vessels sailing, which included nine in December, a record calendar month performance to date from the integrated operations.

Frank Timis, Executive Chairman of African Minerals, said: “African Minerals has made strong progress during 2013 and especially in Q4 and it is particularly pleasing to see a record nine shipments in the month of December. The Tewoo transaction is continuing to move forward and I look forward to welcoming Tewoo as a partner in the project and a shareholder in the Company during 2014.”

Bernie Pryor, Chief Executive Officer of African Minerals, said: “The Tonkolili project finalised its construction only in May 2013, and has been in the process of commissioning and ramping up over the last eight months. We are pleased with how that ramp up has progressed and we look forward to achieving the sustainable 20Mtpa run rate during 2014. I am delighted to confirm the Company achieved its export tonnage guidance for the year, with 12.1Mt being shipped – almost triple the 4.1Mt achieved in 2012. I am confident that during 2014 we will see the project’s production stabilise at the 20Mtpa target run rate, with cash costs falling to approximately $30/t. We will provide guidance for FY 2014 production with our Preliminary Results, expected to be released on 31 March 2014.”

He said the success they’d achieved during the past quarter formed the foundation for their next expansion.

“We expect to be able to achieve a near term low capital cost optimisation and expansion to our infrastructure capacity, and we intend to start the construction of the first of our Phase II saprolite plants at the end of this year, with up to 10Mtpa of final product concentrate processing capability being brought online in 2016, allowing us to extend the life of our DSO operations.”

Pryor assured that as ever the Board remained focused on achieving sustained targeted production rates, a reduction in costs and increased returns to their shareholders.