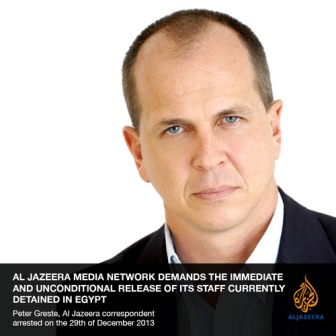 US senator John McCain says the detainment of the Al Jazeera journalists by the Egyptian authorities is a “clear violation” of human rights and freedom of press.

Speaking in Davos, McCain labelled the detentions a “clear violation, not only of their human rights, but any aspect of freedom of the press. Al Jazeera has been chronicling events in Egypt, probably more intensely than any other world network. For the Egyptian government to keep them in prison, I think it is another indicator that this military government, and that’s really what it is, is not keeping with the standards of international behavior as we would expect.”

McCain said he hoped the Egyptian authorities will take on board his message if they want to be part of the international community: “My message to the Egyptian government, and I know these people, is and has been: if you want to be part of the community of nations and have our cooperation and assistance, then you cannot engage in practices such as the arbitrary imprisonment of members of the media.”

Scores of journalists worldwide, along with organisations involved in media freedom, have joined the call for their release, including Committee for Protection of Journalists, Reporters Without Borders and International News Safety Institute.

The interview is available online.http://bit.ly/KU2r46

Unemployment is a global issue and...