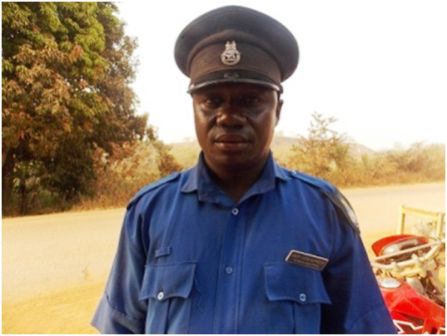 Since the restricting of the Sierra Leone Police, there are some officers who want to maintain the image of the force as a force for good.  (Photo: PC 10637 Alfred Keini Lissa commended)

Police Constable 10637 Alfred Keini Lissa of the Tankoro Police Division is one such Policeman as he is reported to have refused a bribe of one hundred thousand Leones from the driver of a Sunny Taxi cab with vehicle registration number AFX 143.

The reports further explain the driver was arrested last week along the Motema highway in the Nimikoro Chiefdom in the Kono District for various traffic offences like overloading, driving on an expired drivers’ license, and bald tires.

Speaking to this paper, Mr. Sahr Lebbie, a passenger on board a vehicle traveling to Makeni, commended PC Lissa who he said behaved as a responsible officer.

In an interview with the Local Unit Commander of the Tankoro Police Station, Superintendent of Police Gavio, commonly known as The Lion, commended his officers, describing them as hard working men and women who have brought so much respect to the station. He maintained that they will continue with their good work to protect lives and properties.

Hon. S B B Dumbuya is Sierra Leone...