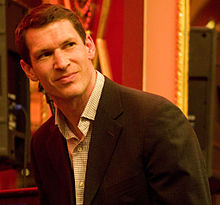 Tim Hetherington was a British-American Photo Journalist who was killed in Misrata in Libya in April 2011 whilst covering the Libyan conflict,

Tim Hetherington bagged many awards for his hard work and visited Sierra Leone during the civil conflict where he met with local media practitioners, students, and blind people.

Presenting the award to Mr. Allieu, the former British High Commissioner to Sierra Leone, Paramount Chief Komrabai Peter Penford, said he was very much delighted to give this prestigious award to a blind person who has worked so hard to develop the lives of his fellow blind and disabled people in Sierra Leone since leavening University. He noted that he is passionate of blind people because they are useful in society and they can effect change national development.

Mr. Thomas Allieu is the Founder and Director of the Educational Centre for the Blind and Visually  Impaired in Sierra Leone and has been working tirelessly  to make the lives of blind people better which urges the Tim hetherington Foundation to give him the award for 2013.

Receiving the award, a certificate and the sum of one million Leones, Mr. Thomas Allieu thanked the organizers. He said he felt very proud and honoured to be given the award, which he said has motivated him to work harder for the emancipation of blind people. He called on disabled persons to be steadfast and serious in their work.

In his vote of thanks, Dr. Abdulai Dumbuya commended the Tim Hetherington Foundation for acknowledging the activities of blind and disabled persons.

He noted that this award is a winning to all of the disabled persons in this country,

He called on able bodied persons to treat the disabled issue with the seriousness it deserves.

Notice of Vacant Position - EC &am...