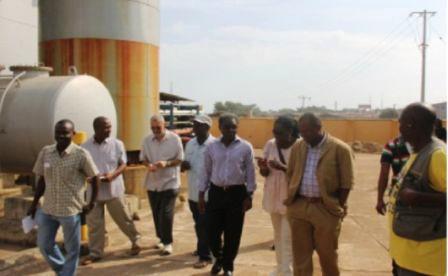 Accompanied by some members of the media, the World Bank Country Director and team ended with field visits to some of the sites of the Energy and the Infrastructural Development Projects in Freetown. At the Power Stations in both the West (Wilberforce/Spur Loop) and East (Blackhall Road), the Country Manager expressed satisfaction over the availability of some highly skilled and knowledgeable technical staff within the sector and their “diligent efforts at improving the service delivery”. However he noted that issues about effective management of the facility including safety of both man and machine continues to be of a concern as even protective gears for workers appear to be absent.

The Story is not so different at the Ports. Even though, according to the Deputy General Manager of the Sierra Leone Ports Authority, there has been significant improvement in the ports facility and general administration through the support of the World Bank’s Infrastructural Development Project, the authority still struggles to sort out some of its basic challenges.

These fenders were installed with the Bank’s support but the Authority is still struggling to tackle the gradual collapse of the Quay. They have requested for a second phase of the Infrastructural Development Project which the CD thinks may be possible.

The media covered all the discussion but the CD was kind enough to grant a couple of one–on-one interviews including the National Broadcaster. The Visits were led on the government side by the Chair of the National privatization Commission – Dr. Michael Kargbo.

CHANGE IS HAPPENING WITHIN THE AFCWI1 CMU

Owing to the strong collaboration between the World Bank and the IFC within the AFCW1 CMU, the change process sweeping the World Bank Group globally appears to be progressing effortlessly. Not only that IFC is participating in project negotiations, it is very much involved with the operations and stakeholders engagement. Yesterday’s media engagement and today’s field visits are only the latest activities pointing to the increasing integration reflecting the change

“IFC has been involved with the setting up of the Business Forum, Tax Administration system, Sierra Leone Investment and Promotion Agency, Business Registration, Credit Bereau etc and has also support businesses in telcoms, banking, mining and many more sectors”, Madam Agboli added.

The world bank has expressed its desire to continuos engaged with all stakeholders in Sierra Leone regarding its operations in Sierra Leone has encouraged the media to rise up to the challenge in ensuring efective implementation of projects.

Landmark Legacy of an Effective Go...