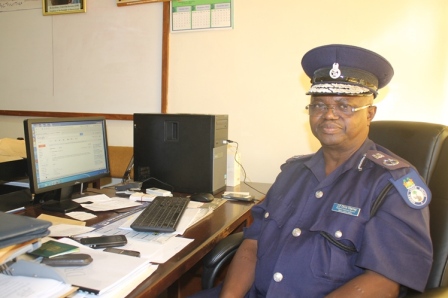 The Director of Community Affairs in the Sierra Leone Police (SLP), Assistant Inspector General of Police (AIG) Chris Charley (in photo) has described 2013 as a very troublesome year and prayed for the SLP to be able to provide policing and services that Sierra Leoneans expect from them this year.

Addressing newsmen at a press conference on Tuesday, January 7 at the Police headquarters, George Street in Freetown this year, he appealed to members of the SLP to continue taking security matters with the seriousness they deserve.

He emphasized that President Ernest Bai Koroma is ready to curb lawlessness, indiscipline and corruption among Sierra Leoneans and depended on them to achieve this objective.

He maintained that President Koroma has given them the political will to fight all the menaces that hinder the development of the country by strengthening their core functions for them to be able to maintain law and other in the country.

He stated that lawlessness is a recipe for disaster, adding that no country in the world can achieve economic and social development if it is bedeviled by lawlessness and corruption.

He maintained that they are ready to support the Freetown City Council to remove traders from the streets of Freetown.

In his comments, the Director of Crime Services, AIG Murray Lengor, said they will continue to work together to provide necessary services to the people of this country.

He explained that the Criminal Investigations Department (CID) is the main subdivision in his Directorate that investigates all criminal matters in the country. He pointed out that every Division has a CID that is responsible for investigating cases.

He disclosed that the promotion exercise of Police Officers was ongoing and they will soon announce the promotions.

He also revealed that they have introduced the Performance Management System wherein every Police Officer within the rank and file will be periodically appraised for his/her performance.

He reported that Police Officers in the peace keeping mission in South Sudan and Somalia are performing very well.