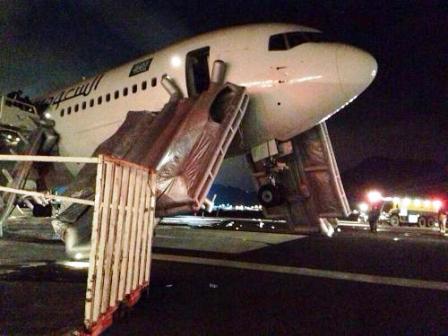 Twenty nine people were injured when a Saudi Arabian Airlines (Saudia) Boeing 767-300ER made an emergency landing at Madinah airport in the holy city of Madinah early Sunday, January 5, 2014, the General Authority of Civil Aviation said.

Ahmed Ramadan Sesay, a British/Sierra Leonean was one of the lucky passengers who came out of the plane unhurt. In a telephone interview, Sesay says he left the UK last Thursday for the Iranian town of Mashhad on an official visit.

“After completing my official duty yesterday, I decided to visit Saudi Arabia to perform the minor pilgrimage (Umrah) before returning to the UK. I thank God for coming out of the plane unhurt and I will use the opportunity during the Umrah to thank my Creator for what he has done for me,” Sesay told the Information Bureau of the Sierra Leone Mission in Riyadh this afternoon.

The flight, according to the Saudi Civil Aviation, was carrying 315 passengers and suffered a technical malfunction. Report says the pilot had reported a malfunctioning rear wheel.

Photographs and video footage posted online showed the plane on the runway with damage to its right wing. The Saudia spokesman, according to reporters verified the authenticity of the images.

State-owned Saudia is the national carrier of Saudi Arabia and it’s known to be a reliable and safe airline.

Catch a Movie Rising Star in the U...

Conakry, the Republic of Guinea, 4 Octob...