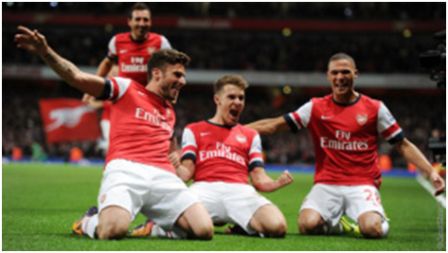 Last weekend, Arsenal faced Liverpool in the late game on Saturday in a fixture that pitted the top two teams in the Premiership against each other, a throwback to the late 80s and early 90s when these two clubs battled each other for the league title year after year.  This time around, there was little in the way of a contest between the sides, as Arsenal ran out comfortable winners, prevailing 2-0 thanks to a goal in each half from Santi Cazorla and Aaron Ramsey, a result which saw the Gunners extend their advantage at the top of the table to five points.  They hold that lead over three clubs: Liverpool, who will have been particularly disappointed that the previously potent partnership of Luis Suarez and Daniel Sturridge offered little goalscoring threat in their toughest match of the season; Chelsea, who suffered a surprise 2-0 defeat away at Newcastle United; and Spurs, who earned a credible 0-0 draw away at Everton, though their blank in front of goal means they have scored only 9 times in their opening ten Premiership fixtures.  (Photo: Aaron Ramsey celebrates his goal against Liverpool with Giroud and Gibbs)

The flip side of that coin is that Tottenham have also kept 10 clean sheets in that time, the first time in their history they have achieved such a feat, though the one at Goodison Park proved to be controversial as their goalkeeper, Hugo Lloris, was allowed to play on after he had been knocked out by a collision with Romelu Lukaku’s knee.  Watching the game live, it seemed incomprehensible that Lloris would be able to stay on the pitch, let alone be given the okay to do so by the medical team, since the whack he took to the head looked very serious and he required several minutes of treatment.  Since the incident, many people have criticized the club and – in particular – manager Andre Villas-Boas for keeping the French goalkeeper on the field, especially as more and more is being learned about the dangers of concussions.  However, what has to be remembered is that Lloris himself was insisting he wanted to play on – something that draw a round of boos from the usually excellent Everton home support, who will hopefully feel a little bad at their reaction in hindsight – and he appeared to suffer no further ill-effect from the incident.  While concussions are a very serious topic (one that I covered here) and athletes in many different sports, including football/soccer, need to be protected, that is not achieved by overreacting to an event that ended with the players wanting to stay on the field and having done so, proved he was clearly with it by making a couple of crucial saves that earned the draw for Spurs.  Obviously the result is not as important as Lloris’ health, but in this instance, it was not a choice between one or the other and the hypocritical reaction of many in the press – who have ignored the effects of head injuries for so long in sport, but are now wanting to jump on the bandwagon – does nothing to further the worthy cause of protecting athletes.

In the battle between Lukaku’s knee and Lloris’ head, somehow the latter won

One person who will want to forget the weekend of footballing action will be Chris Hughton, who took his Norwich side to the Etihad where they caught Manchester City on a rampant day, as the 2011/12 champions racked up seven goals against the Canaries.  The race for the next manager to lose his job in the Premiership could come down to Hughton and his former boss at Tottenham, Martin Jol, as the Dutchman’s position became more precarious with a 3-1 home defeat against Manchester United, who had the three points wrapped up well before half-time.  Sunderland’s winning run came to a half at 1, as they had more men sent off in first half stoppage time (two) at Hull than they did shots on target (one), although to be fair, it was a Black Cats player who scored the only goal of the game, but unfortunately for Carlos Cuellar, it was into his own net.  In a shock to exactly nobody who has ever watched him play before, one of the men dismissed for Sunderland was Lee Cattermole, the seventh time he has been shown a red card in a Premiership fixture.

Last weekend also saw the first ever all Welsh game in the top flight of the English league system and it was the home team, Cardiff, who took all three points thanks to a second half header from Steven Caulker.  However, the Bluebirds – who have been rebranded into red home kits – should be deducted a point for failing to take advantage of one of the most fun things that can ever happen in football – an outfield player going in goal.  Such a scenario used to happen more frequently when I was younger, since substitutes were limited to just two players and nobody ever had a reserve keeper, so any injury or sending off would see a defender, midfielder or striker being forced to don the gloves.  With it being so rare, it was a shame that when Swansea had used up their three substitutions and were thus forced to put their right-back Angel Rangel in goal following Michel Vorm’s late dismissal for a professional foul on Frasier Campbell, Cardiff only tested him from the resulting free kick, then took the ball into the corner to waste time and did not take potshots at Rangel.  Maybe the home supporters will just be happy to have taken three points and leapfrogged their rivals in the table, but for a neutral like me it was such a disappointment to see that opportunity wasted.

So much went on in the 10th round of Premiership fixtures that it is only this far down that I get to the fact that the Stoke goalkeeper, Asmir Begovic, scored inside 18 seconds of his team’s fixture against Southampton, the side with the meanest defense in the league.  It was a gust of wind – not a rate occurrence at the Britannia Stadium since the corners of the ground are not closed up and thus are open to the elements –  that caught Saints goalkeeper, Artur Boruc out, but his team still rallied back to claim a point thanks to an equalizer by Jay Rodriguez.  Begovic became just the fifth keeper to score in the Premiership and the third to so from his own half (Peter Schmichel and Brad Friedel both found the net when they ventured forward for a late corner when their teams were trailing), joining Tim Howard – who had been the previous shot stopper to score, doing so in January 2012 against Bolton; and Paul Robinson, who got on the scoresheet for Spurs with an 80 yard free-kick in a game with Watford, a match that I was at in person, sitting behind the goal that the ball ended up in and all of us in the crowd were stunned and in disbelief at what we had just witnessed.

In the less eventful games last weekend, Aston Villa and West Ham ended their fixture goalless; and West Brom heaped more misery on Crystal Palace with a 2-0 win at the Hawthorns.  In European action, Arsenal gained an impressive 1-0 victory away at Borussia Dortmund, which sees the Gunners on the brink of reaching the knockout stages of the Champions League; as are Chelsea, who matched their earlier 3-0 win in Germany against Schalke with a matching scoreline at Stamford Bridge this week.  Manchester United had to settle for a point away at Real Sociedad, with Robin Van Persie missing a second-half penalty; while their local rivals City progressed past the group stages for the first time in their history thanks to a 5-2 victory over CSKA Moscow.  On Thursday, Spurs can ensure their progression to the next round of the Europa League if they can outshoot the Sheriff at White Hart Lane; which would be useful as they could then rest players for the next fixture they face in the competition which is to be played north of the Arctic Circle against Tromsø.

This weekend, the big fixture is at Old Trafford, as Arsenal face a team that finished above them last season for the first time this campaign, but they will go into the match, against a United side who have been far from dominant this season, full of confidence as the Gunners sit on top of the table, clear of all of their rivals.  Elsewhere, in the last round of fixtures before the latest international break – which includes the playoffs for the final World Cup places – Jose Mourinho will face one of his former assistants as his Chelsea team face Steve Clarke’s West Brom; Crystal Palace entertain Everton; with that two-week break coming up, Jol and Hughton will be eager for good results to try to avoid the sack and their Fulham and Norwich sides face Liverpool and West Ham respectively; Southampton take on Hull at St. Mary’s; Newcastle are in North London to play Spurs; Manchester City go to the Stadium of Light to face Sunderland; Swansea will try to rally back from their derby defeat when they play Stoke; while Cardiff are at Aston Villa.