Maada and Fatima Bio’s wedding: The facts and misconceptions 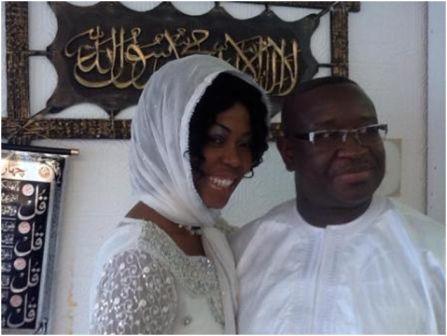 Maada and Fatima Bio’s wedding: The facts and misconceptions

If you are a Christian, you may have come across Proverbs 18:22 which says “He who finds a wife, finds a good thing and obtains favour of the Lord”.  If you are a Muslim, you may have come across Qur’an 30:21 where Allah says “And among His Signs is this, that He created for you mates from among yourselves, that ye may dwell in tranquillity with them, and He has put love and mercy between your (hearts): verily in that are Signs for those who reflect”.

For me, whether you are a politician, professional, business man, civil society activist or ordinary person, in our religions and communities, Marriage has always been an institution of family, love and care which ought not to be determined by our tribes, religions or nationalities. But at the same time as our socio-cultural lives change in a fast moving world, we must recognise that whilst many people believe in the values of marriage, there are others who because of their individual circumstances may have different opinions about marriage and we must respect those opinions as a society as we have always done.

This brings me to the issue proper which is the media reports of a “secret” wedding between the Rtd Brig. Julius Maada Bio and Fatima Jabbe-Bio.  Firstly, for anyone who knows the Rtd Brig. Julius Maada Bio, despite he has been at the highest echelon of state governance since his late 20s, he has always been a private person. As I have come to know him, he has always believed that as individuals everyone is entitled a respect of their private life except where that private life raises a public interest issue on the reputation as a holder of a public office or in the discharge of a function as public officer. Therefore, any emphasis on a “secret” wedding of Rtd Brig. Julius Maada Bio is both mischievous and a very inaccurate. He is a private person and he has always wanted private wedding arrangements.

And at a time when our country faces great challenges whether it is about a legacy of youth unemployment; one of or if not the highest rates of child and infant mortalities; a cost of living crisis; limited access to clean drinking water; infrequent electricity supply; a clampdown on press freedom; falling standards in schools and colleges and severe hardship; for anyone to suggest that Rtd. Brig Julius Maada Bio, a politician who understands the daily suffering of ordinary people, to have embarked on a lousy wedding is very insensitive. Yes as arguably the most popular politician in the country, every well-meaning Sierra Leonean would love to wish a young, dynamic and responsible politician a happy marriage life but ordinary people going through hardship know that they have far more important things in their lives just to bother about whether a grassroots politician embarks on a private or lousy wedding. After all, whether Rtd. Brig Julius Maada Bio has a private or lousy wedding how does that put food on the table for a struggling family or provide jobs for thousands of unemployed youths? And Rtd. Brig Julius Maada Bio’s capability to provide a strong leadership for the people of Sierra Leone in addressing the issues which affect their daily lives such as the rising cost of living; accessing healthcare; providing jobs for young people; improving the quality in the standards of education; providing electricity and drinking water etc, will never be affected by his marriage just as President Koroma’s failure to address these urgent issues facing ordinary people has not been as a result of his marriage.

Most importantly, Rtd. Brig Julius Maada Bio is a young man who values his culture and tradition as he hails from a ruling family. Therefore, for anyone who thinks Rtd. Julius Maada Bio will complete his marriage rites without showing his beautiful bride to his family, friends and hundreds of thousands of his SLPP supporters is unimaginable. But like any responsible politician will do, his first duty has been to show respect to the bride and her family (some of whom reside in London whilst others are in Sierra Leone and Gambia). And for Rtd. Brig Julius Maada Bio, a devout catholic, asking a hand in marriage of Fatima Jabbe, a devout muslim, also shows that Rtd. Brig. Julius Maada Bio symbolises a politician who cut across religions and has extolled the virtues of our religious tolerance as a nation where a young Christian man can marry to a young muslim woman or a young muslim man can marry to a young Christian woman.

So the question which everyone keeps asking is: who is Fatima Jabbe-Bio? Fatima Jabbe was born to a Sierra Leonean mother, Tidankay Jabbie who hails from Kono district and a Gambian father, Umar Jabbe who lived in Kono for many years as a business man and in those days owned properties in Kono. Fatima Jabbe-Bio then grew up in Kono where she attended the Ansarul Islamic School and later attended the St Joseph Convent Secondary School in Freetown. As a matter of fact through her maternal lineage, her late grandfather Alhaji Marabou Jabbie hailed from Kono whilst her late grandmother, Isata Nabay hailed from Segbwema.

But it is not all about her deep rooted connection in Sierra Leone, as a little girl growing up, born to a Sierra Leonean mother and a Gambian father who both lived as an admirable family in Kono is as much revealing as Fatima’s academic and professional career life. As a very promising and determined young woman, Fatima Jabbe-Bio holds a Bachelor of Arts with Honours degree in Performing Art from the Roehampton Institute in London. This BA (Hons) degree in Performing Art prepared her to start a very successful career in the African Film Industry in London which has made her not only one of the most elegant Nollywood Actresses but also a talented scriptwriter and executive producer.

Fatima Jabbe-Bio has starred in many nollywood movies such as “BATTERED”, “Shameful Deceit”, “Expedition Africa”, “My Soul” to name but a few. Over the years, she has been  cast with famous nollywood actresses including Genevieve Nnaji and Osita Iheme (Pawpaw) in one of the most award-winning movie “Mirror Boy”. She has also written and produced her own movie “Battered”. And part of her award collections for her talent in the film and fashion industries have been: an award for “Miss Africa 2000” in the UK; “Best Supporting Actress” for the movie “Mirror Boy” at the ZAFAA Awards 2011 in the UK; She has also won “Best Actress Award” from the Black Ethnics, Fashions and Film Industry in the UK 2011; Pan-African “Woman of the Year Award” was given to her by ‘All African Media’ based in Ghana; and just in September 2013, Fatima Jabbe-Bio was voted the best female actress at the African Oscars in Washington DC, from a list of 32 nominees in Africa People’s Choice Best Actress category. She won the award ahead of other nollywood superstars including the likes of Omotola Jalade, Monalisa Chinda, Queen Amina and Ify Hollywood. But that is not all, very recently, on 27th October 2013, she won the Gathering of African Best (GAB) Awards for her exceptional contribution for promoting a positive image of Africans around the world; an event which revealed the accomplishments of award winning Africans.

Equally important is the fact that her talent and contributions in the film and fashion industries have also been honoured and recognised by the Sierra Leonean Community in the UK as one of our talented sisters where she was awarded the ‘Best Dress Actress’ and ‘Best African Breakthrough’ by the Sierra Leonean Excellent Award in the UK in 2011. And in a bid to promote the Sierra Leone Film industry she recently travelled to Sierra Leone to  shoot the now internationally acclaimed “Ibu in Sierra Leone” which was recently premiered in London and starring Desmond Finney, Collins Archie-Pearce and John Okafor (Mr. Ibu).

Also, it is not all about her talents in the film and fashion industries as she is also very charitable and compassionate. She is a Patron Member of many charitable organisations in the UK including the John Utaka Foundation helping African children and young people who are mentally and physically disable. And couple of days back, this was what Fatima Jabbie-Bio said to me “As someone who has always been proud of Sierra Leone as my maternal home where I grew up, I have always been looking forward to working with stakeholders in helping children and young people whilst at the same time continue to promote and support the Sierra Leone Film Industry at local and international level”.

And in addition to broaden her talents and versatility in the creative industry, by next year Fatima Jabbie-Bio will also be completing another Bachelor of Arts with honours degree in Journalism at the University of the Arts, London College of Communication, an award-winning media institution.

Whatever the politics, for our country to be the maternal home of such a young, talented and internationally renowned woman who is also very proud to call Sierra Leone a HOME it is refreshing, as she will always be a wonderful role model to our young talented women in the creative industry. And thanks to the former SLPP government of Pres. Kabbah, because of the enactment of the Sierra Leone Citizenship (Amendment) Act 2006 which repealed section 10 of the Sierra Leone Citizenship Act, 1973 to grant the right of dual citizenship.