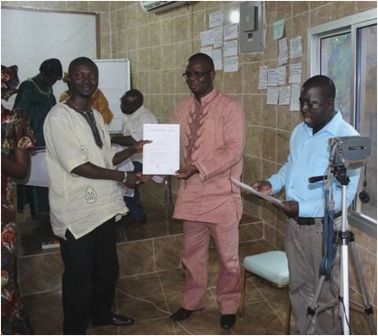 In a bid to build the capacity of local councils ActionAid International Sierra Leone has concluded week long training for 20 Councilors and staff drawn from the Bo City and District Councils.  (Photo: Center –  Development Oriented Executive Director of ActionAid Sierra Leone Mohamed Sillah handing over a certificate to one of the Participants from Bo District)

The training gears towards strengthening the delivery of quality public services and equity in resource distribution in both the councils through acquiring the required human resource capacity that would enhance the ‘effectiveness of the Councils by ensuring monitoring of development processes, knowing their democratic roles and responsibilities in carrying their local government mandate from human rights based approach, to be able to advance evidences for stronger advocacy, resource mobilization, to be critical to ask questions that would promote accountability and thus improve good governance to greater extent.

This is the second set of budget and accountability training rolled out by ActionAid having conducted same targeting forty councilors and council staff in Makeni and Bombali District Councils.

Speaking during the certification ceremony which climax the training at the Sarah Hotel in Bo, Southern Sierra Leone, the Executive Director of ActionAid Sierra Leone Mr. Mohamed Sillah impressed on the minds of the participants that accountability is a two prong approach which requires the Councilors and Council staff to be accountable to their electorates and in return the people also to be accountable to the Councils.

He therefore called on the Councilors and Council Officials to be the change of development they would want to see in their localities. According tothe Director, ,a total of 240 Councilors and Council staff from six Councils: the Bo City and Town Councils, Freetown City and the Western Rural Area Councils are targeted to benefit from the six accountability and Budget trainings.

‘’It is clear that the Councils are faced with strong criticisms for not delivering as expected, but the Councils are failing to educate their constituencies, ask the central government critical questions and not holding central government accountable for the late and inadequate disbursement of funds. Sadly enough, citizens are not demanding and advocating enough by asking duty bearers critical questions in relations to the provision of basic services in the councils and communities where basic services are most needed.

Highlighting the challenges that underpin the effectiveness of councils include the late disbursement of funds, gross underfunding, poor working conditions. Councils will never be effective in delivering their mandate and development strides are not strongly monitored, backed by conscious collective efforts and evidence based advocates and monitoring of their budget implementations, projects and programmes remain weak as they are currently.

The evidences (implications) that are caused as a result of underfunding and delayed disbursement of funds to the councils should be documented in order to put them forward in their advocacy drive for effective support of the devolution process. The Councilors should be monitoring all developments in their localities’’ said Mr. Mohamed Sillah, the Executive Director of ActionAid Sierra Leone.

The Executive Director of ActionAid Sierra Leone, Mr. Mohamed Sillah while delivering certificate of to the twenty participants who benefited from the accountability and budget circle training said the most important resource Sierra Leone requires for its development was the human resource capital of its citizens. He added that as people, we were still grappling with development even though with all our mineral wealth, because our human resource capacity is still weak.

The Director admonished the Councilors and Council officials to take along and put into practice all the knowledge they have acquired over the past five training that is geared towards the effective delivery of the Councils’ mandate.

The Deputy Chairman of the Bo District Council, Martin Goba, one of the participants had this to say: ‘’ this training was first of its kind to have brought together the crop of Makeni City and Bombali District Councils Councilors and Council staff to learn about modules that included understanding the budget cycle which starts from the formulation stage based on the needs and resources that are available onto its implementation and monitoring of its implementation.

He added that the training also entails accountability – trainers who came from the MS Training Centre for Development Co-operation, Arusha – Tanzania letting us to understand that ensuring accountability in the work of councils is both ways; from the Council and the people who are the tax payers.

As a Councilors, our knowledge in models like local government interfacing, democratic governance have increased tremendously and above all, we now have the realization that our work in the local government process should be in line with the principles of human rights based approach’’ The Deputy Chair added.

Giving a similar account of the training, Councilor JosephineY. Conteh described the training venture organized by ActionAid International Sierra Leone with funds from ActionAid Denmark as one that would empower the Councils more. She said the key highlights of the training were on the models especially gender mainstreaming in the Local Council processes, revenue mobilization and ensuring tax justice for the effectiveness of the councils and development of the local government areas.

Surprisingly, it was revealed by the participants themselves that since they joined the Local Councils they have never had such capacity building trainings of such nature and before then they have been faced with was principally low capacity to ensuring processes that would foster the Challenging issues of late disbursement of funds to the council, inadequate During the training sessions issues relating to

The participants unanimously affirmed that this was the first time they had benefited from such good governance promotion training since they assumed their respective duties. They assured ActionAid Sierra Leone that the knowledge acquired would help them improve their work in the Southern provincial regional City and District Councils of Bo.

As FCC celebrates Municipal week i...

Africa’s agribusiness worth US$1 t...