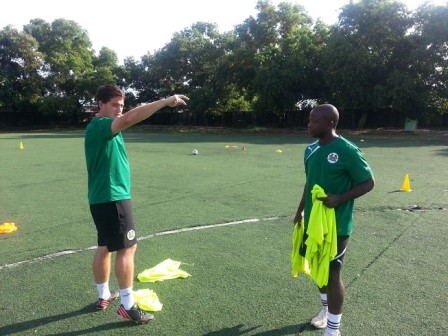 As part of its building-up process towards the GOtv West Africa Football Union B (GOtv WAFU B) Nations Cup in Kumasi, Ghana, the Sierra Leone national Home Based Squad will be traveling this weekend to both Koidu Town and Kenema City to engage the back to back Sierra Leone Premier League Champions, Diamond Stars of Kono and Kambui Eagles of Kenema respectively.

The 30-man contingent will be leaving Freetown on Friday for Koidu Town, where they will be engaging Diamond Stars on Saturday afternoon before moving on to Kenema City to lock horns with Kamboi Eagles on Sunday afternoon.

According to Head Coach, John Mckinstry, 23 out of his 25 short listed players will be making the trip to give the technical team the prospect of using different options in both matches while the two other players (Defender Akayikay and Goalkeeper Pepe) will stay in Freetown due to illness and rotation policy respectively. He says the team have been looking good in training and are responding to new tactics positively.

“The two matches in the provinces will provide us an opportunity to put those new ideas into practice and assess individual players performances because at this stage, performance comes before results. These games will help us build a formidable and competitive squad that will arrive in Ghana fully aware of individual roles, responsibilities and team ethics required to gain success in a competition,” Coach Mckinstry says.

Last weekend, the Home Based Squad engaged this year’s new sensation in the Sierra Leone Premier League, second place, RSLAF at the Football Academy Grounds where the latter were defeated 2-1 in a match that could be described as pulsating.

The 3rd WAFU B Nations Cup sponsored by GOtv will be played in Kumasi, Ghana from the 21-28 November and Sierra Leone will be competing for the top two slots in Group A with Ghana, Benin and Burkina Faso while Group B will be a battle among Togo, Niger, Senegal and Gabon.

Sierra Leone and Ghana will be playing in the first match of the opening day and two days later takes on Burkina Faso while the match against Benin will be on the 25th.