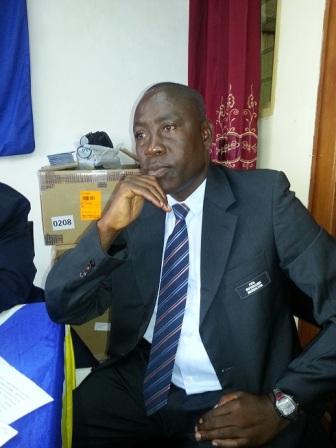 The Sierra Leone Football Association (SLFA) will host the FIFA elite referees course at the associations’ Secretariat in Kingtom. The opening session which started on 21st October was well attended by referees from the four cardinal points of the country and it will run for four days. The training will be conducted by FIFA Referee instructor Joseph Wellington, FIFA Regional Referees Development Officer Sisi Bekaye Magassa and FIFA fitness instructor Mark Ephraim Mzengo.  (Photo: FIFA referee instructor, Joseph Wellington)

Opening the session the President of the SLFA Isha Johansen said, “In any sport, the referee is the person tasked with the authority to preside over games with neutrality and make decisions which will demonstrate the level of their knowledge of the game and their understanding of sportsmanship, which is FAIR PLAY.”

She said that during her first visit to FIFA, she was privy to reports and information about the conduct of referees from Sierra Leone which was not pleasant or impressive, but they are not meant for public consumption.

The president added that she understands the passion of the referees, but added that they cannot not be more passionate than her in the thrive to make the game grow and therefore if there are any referees among the trainees who do not fit the bill or make the grades, they will not pass.

Mrs. Johansen went on to further assure the trainers and instructors from FIFA that the FA will like to present a crop of solid and disciplined referees to FIFA after the training and above all referees with integrity, but she however appealed to them not to select officials out of sentiment after the sessions if they are not up to the task.

She said “There is nothing like trying to please Madam Isha, if you do not find competent referees, they will have to try again. You should not pass them.”

Refs Posing with the FIFA instructors and FA executive

‘RAISE THE GAME is the Slogan of the FA and it is about the new direction of football in Sierra Leone. It is about upping the game in every sphere and that includes referees, players, administrator and everybody in the association’ she concluded.

Making his statement wellington who is also not a stranger to the referees, said this year, he was asked to make a presentation in Zurich about the work he has done and what he has been able to produce as far as Sierra Leone Football is concerned, which referees are on the elite list of CAF, Senior and young talent categories.

He said “I couldn’t answer! Liberia, Ghana, Nigeria are doing well, and even the Gambia have produced a world cup a 32 year old referee, Papa Gassama. I was ashamed because there was nothing to speak about. We have been here for five years and investments have been done on referees in Sierra Leone but with no result to show for it.”

Wellington said if the referees committee is not comfortable with referees in the local leagues that are not fit, they as international instructors and trainers are also not interested in them in the international scene. “If you don’t pass the physical fitness test, you don’t get matches.” He added

Giving the vote of thanks on behalf of the referees, referee instructor Alhaji Sanusi Rashid said that having Isha Johansen as the President of the FA and Chairperson of the referees committee is an indication, that the standard of refereeing is going to improve and that participants for the training was done on merits and not sentiments.

The first test for the referees will come on Sunday 27th October when the Leone Stars Home based team will be playing host to the Republic of Sierra Leone Armed Forces Football Team (RSLAF) at the Football Academy grounds in Kingtom.