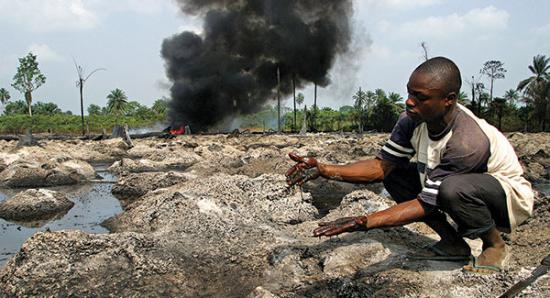 In a stunning and dramatic legal ruling that echoed from the serene court chambers in the Netherlands to the heart of rural Niger Delta in Nigeria, the District Court of The Hague dismissed all but one of the lawsuits brought against Royal Dutch Shell, an Anglo-Dutch oil and gas company, by a group of farmers seeking compensation for the environmental damage caused by the company.  (Photo:Oil drips from the hands of a man as he digs out crude oil spilled from a ruptured pipeline. Photo: Panos/George Osodi)

The lawsuit was filed in 2008 by four fishermen and farmers accusing Shell of ruining their livelihoods through environmental degradation. The claims centred on oil spills that occurred between 2004 and 2007 at the Ibibio-I oil well in the village of Ikot Ada Udo in Akwa Ibom State. The villagers wanted Shell to repair the damages caused to their communities by cleaning up the oil spillage, adequately maintaining pipelines to prevent future leaks and paying compensation for loss of livelihoods.

The court’s ruling revived the old debate on the activities of multinational oil companies in Nigeria. When commercial oil exploration began in the region in 1958, many people felt it was the dawn of prosperity for the country. But decades later, pollution and other environmental damage have led to a feeling of discontent and to protests—sometimes violent ones. The quest for justice and human rights has taken the people of Niger Delta to the courts in Nigeria, and more recently to the United States and the Netherlands.

The Niger Delta people’s ongoing concerns were vividly captured in a 2011 report by the UN Environment Programme (UNEP), published after a two-year scientific evaluation of Ogoniland in Rivers State. The evaluation covered 69 sites and revealed serious environmental and public health concerns. The UNEP report found contamination in the soil, groundwater and vegetation. It further found that “illegal activity” around the oil pipes had also contributed to environmental devastation.

The same environmental problems that UNEP identified had triggered activism in the Ogoniland region in the early 1990s, with numerous lawsuits filed within Nigeria against oil companies such as Shell and Chevron. But according to Nnimmo Bassey, an award-winning environmental activist and head of the advocacy group Environmental Rights Action in Nigeria, this did not stop the companies from damaging the environment through gas flaring, the burning of natural oil. When the courts have fined the companies for damages, “the corporations have just laughed it off; they’ve just not paid attention to [the] fines,” Mr. Bassey told Africa Renewal.

For their part, the companies have denied the charges, arguing that the damage was being caused by oil spills from pipelines destroyed by criminals looking to make profits from illegal oil.

The villagers’ failure to get compensation in Nigeria pushed them to file lawsuits outside the country. Evert Hassink, campaigner at the Dutch environmental organisation Friends of the Earth, says such cases don’t bring “good solution for the victims” or “lead to a better oil field practice.” This despite that some 400,000 tons of oil have spilled in the region over the last 30 years as a result of corroded and poorly maintained pipelines, destroying the environment and ecosystem, according to Friends of the Earth.

The first lawsuit against Shell outside Nigeria took 13 years to be heard in court. It was filed in 1996 by the family of Ken Saro-Wiwa, an author and activist, in the United States District Court for the Southern District of New York, under the Alien Tort Statute, a 1789 law that gives non–U.S. citizens the right to file lawsuits in U.S. courts for violations of international law committed outside the U.S. Although Shell settled out of court in 2009 and agreed to pay the Saro-Wiwa family $15.5 million, it denied the charges that included complicity in human rights abuses and inhumane treatment of the Ogoni people.

“Transnational litigation arises in circumstances where the legal system in the country where the harm occurs is not capable of providing justice locally,” said Robert Percival, the director of environmental law at the University of Maryland in the U.S., in an interview with Africa Renewal. “As a result, the victims will try to sue these companies in [the companies’] home countries.”

According to The New York Times, “while the pollution damage itself was not in dispute [in the Nigerian case], Shell argued that the spills had been caused by so-called bunkering—oil theft from the pipelines—as well as outright sabotage.”

“This ruling will enable more people to understand what is happening on the ground in Nigeria,” said Jonathan French, a Shell spokesman. “We have this rampant problem of criminal activities: oil theft, sabotage and illegal refining. That is the real tragedy of the Niger Delta.” The District Court of The Hague, on 30 January 2013, agreed with Shell about most of the spills that had occurred around the villages of Goi and Oruma. So did Mutiu Sunmonu, the managing director of Shell Nigeria. “In the past years we have seen a decline in operational spill volumes. These spills, however, were caused by sabotage and the court has, quite rightly, largely dismissed the claims.”

The court dismissed all the claims except for one, for which it ruled that it was reasonable to demand a duty of care from Shell for the “people living in the vicinity of the Ibibio-I well and especially fishermen and farmers.” It ruled that Shell therefore should have taken “security measures to prevent sabotage” and as a result was liable for damages.

The ruling appeared to give hope to advocates of international law that anyone could file a lawsuit in any country—or so it seemed until three months later, when the US Supreme Court ruled in April 2013 against the use of the Alien Tort Statute, which has been part of US law for more than two centuries. The case had been filed by Esther Kiobel, the wife of the late Barinem Kiobel, one of the Ogoni Nine activists executed by the Nigerian military government in 1995. The court ruled that “nothing in the ATS’s [Alien Torte Statute’s] text evinces a clear indication of extraterritorial reach.”

“The court essentially said that we should presume that the first US Congress in 1789 did not intend to allow the US courts to hear cases based on tort that happened outside the US, and I think that is wrongly decided,” said Professor Percival. Despite this apparent setback, the ruling may not have much of an impact on cases from abroad, as “it was already so difficult to win these cases.”

There is hope, however, for a landmark ruling made by the Economic Community of West African States Court of Justice in December 2012, which ordered Nigeria to take measures “to ensure restoration of the environment of the Niger Delta,” to prevent environmental damage and to “take all measures to hold the perpetrators of the environmental damage accountable.” The hope is that this will set a precedent for the future in reforming Nigeria’s legal system, or at least ensuring that Nigerians will have recourse to justice within their own country.

“I think that’s the trend of the future, that you will see developing countries being encouraged to improve their own legal systems so that they can provide justice,” said Professor Percival. That, perhaps, is a beacon of hope for the people of Niger Delta.