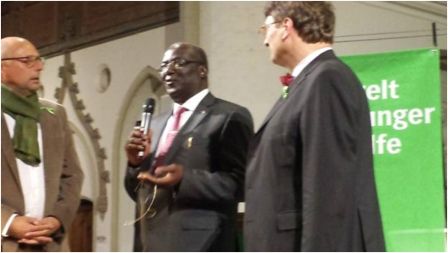 One such example is the German NGO Welthungerhilfe. The organization continues to seek additional funding for local farmers in Sierra Leone to help them produce more cacao through organic farming with advance trading facilities.

Recently a supporter of Welthungerhilfe´ s Circle of Friends in Hamburg, Simone Bruns, organized an exclusive fundraising event to auction valuable contemporary art works designed by prominent artists. The proceeds from the momentous event, which took place on Tuesday 15th October 2013 at the St. Petri Church in Hamburg, will go towards supporting local farmers in Sierra Leone.

The auction exhibition attracted approximately five hundred participants who later bidded for the respective art works. At the end of the biding ceremony, the organization raised a total of sixty thousand three hundred Euros (EUR 60, 300) for the ongoing project.

Speaking shortly before the bidding ceremony, the Guest of Honour, who happens to be Sierra Leone’s Ambassador to Germany, His Excellency Jongopie S. Stevens thanked Welthungerhilfe for their continued support geared towards empowering farmers in Sierra Leone.

He noted that because Sierra Leone’s economic growth largely depends on agricultural productivity, President Koroma has decided, among other measures, to put emphasis on the increased production of staple food, promotion of commercial agriculture and the establishment of an effective rural and agribusiness financing system.

He catalogued the government’s interest in private sector development which he said is aimed at improving the country’s investment climate, generate more foreign and local investment and build government capacity to enter into sustainable and beneficial public-private partnerships. He therefore called on the Welthungerhilfe and meaningful investors to partner with Sierra Leone to meet the critical challenges associated with ensuring sustainable development growth in the country.

Ambassador Stevens welcomed the cacao project undertaken by the Welthungerhilfe in Sierra Leone, noting that such a venture will go a long way in improving not only the lives of the famers and their families, but also in increasing youth employment in the rural areas.

The President of Welthungerhilfe, Ms. Baerbel Dieckmann, reiterated her organization’s vision to fight against global hunger and ensure sustainable food security. She disclosed that Welthungerhilfe started its operations in Sierra Leone in 2004 to support the local population in rebuilding basic rural infrastructure and improve their food security situation.

The intervention, she said, took place after they realized that the people of Sierra Leone were greatly in need of help in terms of food and other humanitarian assistance following the civil war which ended in 2002.

The cacao project, she informed, is one among the several projects undertaken by her organization to enable local famers become self-sufficient and pay the medical and educational bills of their children.

Not all mangroves are identical: n... 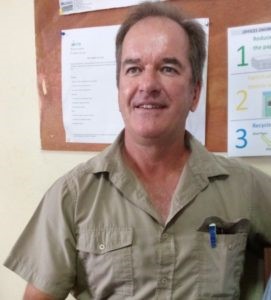