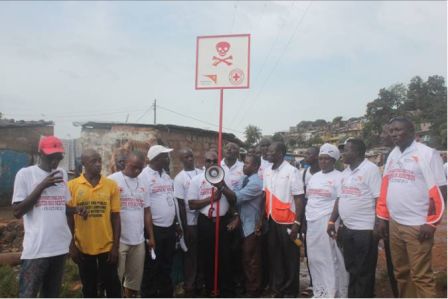 World Vision Sierra Leone in collaboration with the Sierra Leone Red Cross Society joined the world over to commemorate International Day of Disaster Risk Reduction in the country on the 13th October 2013 on the theme ‘living with Disability and Disaster’.  (Photo: World Vision, Red Cross and Local stakeholders erecting a signpost against land reclamation in slum communities for disaster risk reduction)

Councillor Maxwell Lebbie of Ward 382 chaired the ceremony held at a primary school along Bismarck Johnson Street at Congo Town which was attended by several members of the community.

He said residents of Kolleh Town, Congo Town and Crab Town was chosen for the commemorations of the International Day of Disaster Risk Reduction as a result of the disaster prone areas within the community.

He said “we are here to educate the public about disaster management and we care for the welfare of children, women and the disabled living in slum communities.”

He said disables are faced with harsh conditions during disaster period and called on locals to embrace disaster risk reduction in the country so as to save lives and properties.

He pointed out that people should look at their environment and make their contributions to avert disaster in their respective communities.

He said his community is among the disaster prone communities in Freetown and cautioned against indiscriminate reclamation of land.

He said disaster can also cause disability for many people and encouraged people to avoid taking the risk to live in disaster prone areas as many lives and properties will be under threat and also spoke about disposal of garbage on drainages and water alleys.

He said the Freetown City Council will soon embark on massive sensitization of slum communities about disaster risk reduction.

A resident of Congo Town Chief Ya Alimamy Turay  expressed thanks and appreciation to World Vision and Sierra Leone Red Cross Society for the awareness programme and called for support towards disaster risk reduction.

The Operations Director of World Vision Sierra Leone Koi Demoh gave a brief background of their activities across the country but it started to intervene in Freetown to address disaster related issues.

He spoke about disaster impacts towards the vulnerable especially children, women and people living with disability and encouraged locals to embrace disaster risk reduction so as to save lives and properties. He also appealed for the prevention of disaster in slum communities.

He also cautioned residents to take the initiative by preventing disasters in their communities.

Unisa Carew Programme Administrator Sierra Leone Red Cross Society Western Area said disaster is real and people should prevent it and calls for reductions of disaster within slum communities within the western area.

He said the theme for the International Day of Disaster Reduction is timely and appropriate as disability should be the concern of all and called on the people embrace the disaster risk reduction for the benefit of all.

A drama performance and symbolic flagging of identified disaster prone areas at Congo Town, Crab Town and Kolleh Town formed a high point of the ceremony. 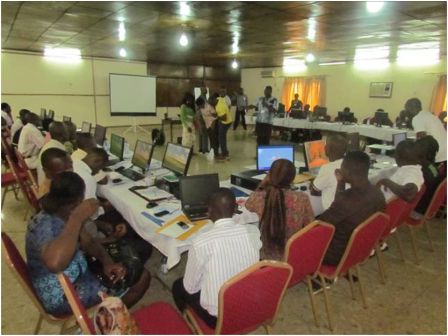 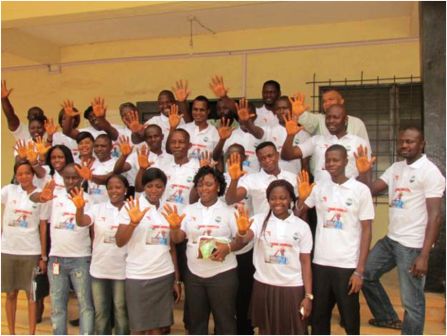