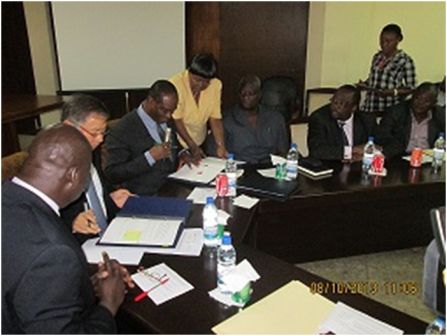 The government of South Korea has come to the rescue of the Freetown City Council in particular by signing a Grant-in-Aid Loan of $55M for the rebuilding of the Freetown City Hall which was destroyed during our county’s civil conflict. (Photo: Signing Foreign Min, AMB Jong-hyun, Head of Mission and Omrie Golley)

The signing ceremony which took place at the Ministry of Foreign Affairs and International Co-operation, this week was signed by the South Korean Ambassador Choi Jong-hyun to Sierra Leone based in Nigeria and Sierra Leone’s Foreign Minister Samura Kamara.

Present at the signing ceremony, were the Head of Mission in the Embassy of Korea, the Mayor of Freetown Bode Gibson, Deputy Director of Asia Eric Gamanga, Lawyer Omrie Golley and officials of both the Foreign Ministry and City Council.

Giving his key note address Minister Samura Kamara said South Korea is a strategic development partner, noting that this project will no doubt transform the Freetown City Council and the capital city with the rebuilding of the new city hall that he referred to as ‘a state of the art.’

“As a government we are trying to strongly build our relationship even beyond as we want to further strengthen our relationship by establishing an Embassy in South Korea” He said.  According to the Minister the loan will cover an unbelievable period of 40 years, with a grace period of 15 years together with a very small interest. “Government believes it will be appreciated by the public and as a first class state of the art complex, it would stand on its own and not depend on government electricity and would be one of the best in the country” he added.

Proposed state of the art building for Freetown City Hall

Ambassador Choi  jong-hyun expressed his delight and that of his government to be part of the development strives of Sierra Leone and equally referred to the proposed building as a state of the art. “The signing of such a loan clearly portrays my government’s satisfaction in your government and further shows the deep relationship that exit between our two countries. This project will benefit the entire country, as no doubt Sierra Leone has progressed under the leadership of President Ernest Bai Koroma” he said.

According to the Ambassador the last general elections were worldwide accepted to be free and fair and that such would doubtless lead to government’s sustainable economy. “My country was among the worst in the world five to six decades ago but we worked hard putting all differences away. Today we are a proud nation, so we clearly understand what it meant to grow. Growth is a gradual process. This project will indeed serve as a landmark between our two countries” he said.

Mayor Bode Gibson expressed his thanks and appreciation to the government and people of South Korea for the loan. This is considered to be a very great achievement of government through my council. I had participated in its designed and little did I know I will be its implementer. As council we will do all we can to see that this edifice will stand to the glory of our nation and the brotherly ties between our two peoples”

After the signing ceremony the Ambassador, his Head of Mission, Eric Gamanga, Omrie Golley and officials walked across the streets of Freetown to the building site and unto the Mayor’s parlor, where drawings of the proposed City Hall were displayed.

The Foreign Minister informed the President that the project is in compliance with his Agenda For Prosperity and that with an established Sierra Leone Embassy in South Korea, the nation can learn more and open up to South Korea business and further strengthen diplomatic ties.

Ambassador Jong Hyun again expressed delight in helping our country, stating that it will further cement the diplomatic ties. “I have noticed so many positive changes this time, especially your people jovial faces. All this is due to your extraordinary leadership and transparent elections. I also notice that the economy is moving fast in line with your Agenda For Prosperity and Mr President please be assured that my government stands by you and your people” he said.

According to the Korean Ambassador the opening of a Sierra Leone Embassy in South Korea will no doubt bring both peoples together, open up business and further strengthen Diplomatic relationship between the two countries.

Responding, President Koroma welcomed the Ambassador and expressed his happiness in the signing of the loan and referred to the proposed building as an imposing structure that will add to the beautification of the city. “We are coming to the point of constructing the highest building in the country and government is very excited about it.  Indeed there is a lot we can learn from your country by establishing an Embassy there that will facilitate business and other related issues”

H.E. again thanked the Ambassador and promised to work closely with the government and people of South Korea.