Government gives $108,000 to students as allowance 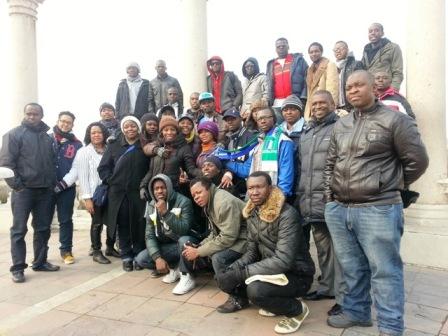 Government gives $108,000 to students as allowance

The Sierra Leone Government, through the ministries of Finance and Economic Development, Education, Science and Technology and the Sierra Leone Embassy in the People’s Republic of China is currently effecting the payment of yearly allowance, totaling one hundred and eight thousands United States dollars ($108,000US) to sixty students studying in China, under its auspices.

Added to the monthly allowance given them by the Chinese Government, through the Chinese Scholarship Council (CSC), the Sierra Leone Government (SLG) annually provides students with allowances. Prior to the election of President Ernest Bai Koroma in 2007, students were receiving the sum of 400 dollars annually for their studies from the Sierra Leone Government. This was eventually increased to 1,800 dollars by the Ernest Bai Koroma led Government.

Giving his reaction on this latest payment of allowances, the Secretary for the Sierra Leone Students Union in China, Alhassan Kamara said, as beneficiaries, they are grateful to the Sierra Leone Government and particularly to the President, His Excellency Dr Ernest Bai Koroma and the Minister of Education, Science and technology, Dr Minkialu Bah “for supporting students and for particularly increasing the allowance from 400 dollars to 1,800 dollars”

According to Alhassan Kamara, a student in International Relations, (Master degree) at the China Foreign Affairs University, “students are more than grateful now that we are receiving 1,800 dollars as allowance given to us by this Government.  Before now, it was a paltry sum of 400 dollars per academic year but with the coming of President Koroma, we have seen this great increase. I must say it is a big push for us and it is a way of sustaining the Agenda for Prosperity to which education is prominent”

Such an increment, he said, is a demonstration of how Government cares for the welfare of students and in “always giving us the needed support”

Speaking specifically on the role of the Embassy of Sierra Leone in China, Kamara said, the support of the Embassy to students has been great and outstanding “This is manifested yearly when we receive new students coming to study and during our annual conventions. The Embassy has also been supportive of us and for which we want to also express our thanks and appreciation”

He assured, on behalf of the students’ body in China, that whatever they do, will be resourceful in helping the development of Sierra Leone “when we shall have returned and we will remain committed in liaising with the Embassy as an Executive for the general good of us here in China.”

Kamara however ended by appealing that the Embassy continues to help in facilitating the departure for students’ personal effects, which was also initially done through a 20ft container but now through a 40ft.

Commenting on the issue on the phone from Freetown, Ambassador Victor Bockarie Foh said, as an Embassy, “We will always work towards ensuring the welfare of students as they are the hope of Sierra Leone. This is a Government that cares for its citizens and we know students have a crucial role in nation building. That is why we will continue to support them because without education, a nation cannot progress”

Ambassador Foh also paid tribute to the Government for such a laudable decision to increase the allowance of students in China. He on behalf of the Sierra Leone Government thanked the Chinese Government for its continuous support to building Sierra Leone’s human resource by granting scholarships to deserving students yearly.

On the shipment of the personal effects of students that have graduated, Ambassador Foh  assured, that this will soon be effected as the Embassy is liaising with the Ministries of Education and Finance for funds.  He called on students to continue working hard and give their time and energy to their studies.

Since the opening of diplomatic ties between Sierra Leone and China, in 1971, the later has been supporting the former in building her human resource capacity by offering scholarship sot deserving students annually.