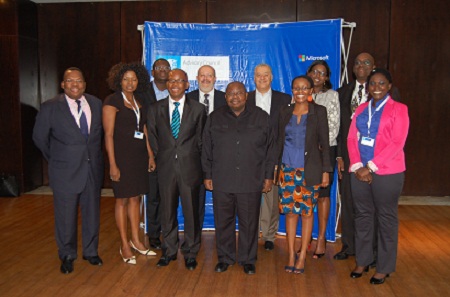 DAR ES SALAAM, Tanzania — Oct. 9, 2013 — Microsoft Corp. on Wednesday unveiled the 4Afrika Advisory Council, an external board of advisers tasked with guiding strategic investments undertaken by the Microsoft 4Afrika Initiative across the continent and ensuring 4Afrika is closely aligned to broad African development goals. His Excellency Benjamin Mkapa, former president of the United Republic of Tanzania chairs the board, and Mteto Nyati, managing director of Microsoft South Africa, serves as the vice chair.

The Microsoft 4Afrika Initiative was introduced in February 2013 as an effort through which the company is actively engaging in Africa’s economic development to improve its global competitiveness. To help ensure the initiative meets its critical goals, Microsoft 4Afrika chose to form the 4Afrika Advisory Council to solicit external input and guidance from a respected group of regional influencers.

“I am deeply honored to chair the 4Afrika Advisory Council and to represent this prestigious group of council members because we all believe deeply in Microsoft 4Afrika’s mission to help Africa improve its global competitiveness,” Mkapa said. “Together with the Microsoft team, we look forward to helping to grow African leaders, encourage and support African businesses and highlight African innovation here on the continent and on the world stage.”

The council had its first meeting Oct. 4, 2013, in Dar es Salaam, Tanzania. At this meeting, the council discussed topics relevant to advancing the 4Afrika mission, including the importance of developing strategies that address both rural and urban youth populations, the role of teachers as content creators, and approaches to building sustainable models for growth of African entrepreneurs and small businesses.

In addition, to ensure that the critical voices of African youth are heard, the council made provisions for four additional slots on the 4Afrika Advisory Council, to be occupied by youth leaders from the continent. Candidates were selected from existing African youth leadership groups, including U.S. President Obama’s Young African Leaders Initiative, the African Leadership Network, the African Leadership Initiative, the Desmond Tutu Leadership Fellowship Program and the World Economic Forum’s Forum of Young Global Leaders. Nominees will be contacted in the coming weeks with formal invitations to join the 4Afrika Advisory Council.

“As established influencers and innovators in Africa, we know that this group composing the 4Afrika Advisory Council will make highly impactful contributions to Microsoft 4Afrika’s efforts to shape development priorities across the continent with the use of technology as an enabler,” Nyati said. “Not only will the group help Microsoft 4Afrika to understand and engage in existing areas of untapped potential, but we are confident it will also help us break new ground within the initiative’s targeted sectors, including healthcare, education and small business enablement.”

The council will meet in person twice annually and will also hold regionally focused meetings at other times in the year. The council members have also committed to contribute to 4Afrika efforts in capacity-building with African youth leaders.

The Microsoft 4Afrika Initiative is built on the dual beliefs that technology can accelerate growth for Africa and Africa can also accelerate technology for the world. More information is available at http://www.microsoft.com/4afrika.

Founded in 1975, Microsoft (Nasdaq “MSFT”) is the worldwide leader in software, services and solutions that help people and businesses realize their full potential.