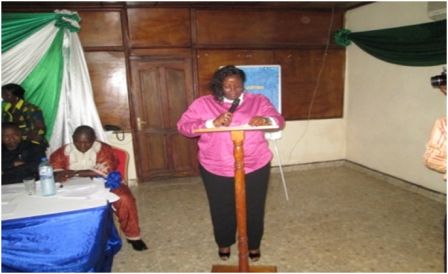 From May 1st. to 3rd, 2013 the World Bank hosted a meeting on Institutions Taking Root: Building State Capacity in Challenging Contexts, at its Headquarters in Washington DC. The meeting brought together personalities from countries emerging from conflict and struggling to overcome fragility. Sierra Leone was among the countries chosen, and the reasons are presumably obvious.  (Photo: Local Government Minister Diana Konomanyi Kabbah.)

The purpose of the Client workshop was to discuss an economic and sector work product that examined cases of successful institution-building in order to understand the factors underlying the experiences and to provide targeted operational insights for the Bank, the wider community and policymakers.

Sierra Leone was ably represented by the Minister of Local Government and Rural Development, Diana Finda Konomanyi-Kabbah and the Director of the Decentralisation Secretariat, Alhassan Kanu.

The Minister did a systematic power point presentation which provided solid background information on pre and post-conflict Sierra Leone with special emphasis on the governance landscapes. She noted that Sierra Leone’s Decentralization was internally formulated and adopted but throughout the peace settlement period, it had strong encouragement and resource backing from donors, notably the WB, DFID and EU. She intimated her audience that Decentralization was legally formalized in May 2004 (LGA04 Act) to address some of the root causes of the conflict including over-centralization of power, corruption and poor service delivery, and pointed out that the process has continued to mature with political, administrative and resource support over the last decade. She outlined some of the most significant steps as:

The Minister succinctly outlined the factors attending the achievements of Local Councils in Sierra Leone, pointing out that the choice of decentralization by devolution and the pre-existence of deconcentrated MDAs was integral in ensuring that Local Councils were provided the leverage to quickly commence the delivery of basic services. She lauded the present Government of Sierra Leone for the astronomical increase and predictability of funds flowing to the Local Councils from the consolidated fund, citing the massive leap from about 7 billion Leones disbursed to Local Councils to about 37 billion Leones disbursed to Local councils just in the first two quarters of 2012. The impact of the introduction of Local Government Development Grant (LGDG) programme to support Local Councils and the massive capacity building support provided to embark on capital investment and effectively undertake professional and technical functions were not left out. Quite interesting was the mention of the people’s power to elect, reject and ask for accountability as fundamental in ensuring that Local Councils performed, a phenomenon which the Minister said was very evident in the local government elections in November 2012.

Speaking about her experience as a Chairperson of Kono District Council, few years back, Minister Konomanyi-Kabbah indicated that she was elected by popular vote based on her close involvement with the community and the fact that she comes from a Chieftaincy House. She said that these factors made it possible for her to win the support and cooperation of chiefs. The Minister was upbeat to state that during her tenure, the Kono District Council took 2nd position in the Comprehensive Local Government Performance Assessment and the improvement in the delivery of basic services e.g. health (Upgrading of some health centres). She however had to grapple with the problems of difficulties in jointly addressing cross-cutting issues with Colleagues in Co-located city, ccoordinating the activities of NGOs was a challenge, weak interface with supervisory ministry and difficulty to improve Local revenue mobilization.

The Minister affirmed that the revival of the Local Councils has brought about the re-establishment of citizens’ trust in the State. She indicated that local people now elect their political representatives at the Council and Ward levels and the decision-making process is now at the doorstep of the local people thus giving them voice to contribute to the shaping of their destiny. According to the Minister, local people are now seeing tangible progress in service delivery in their localities, there is incremental access of people living in previously neglected areas to central government resources and institutions, opportunities have been created for young people to aspire to a career in politics, local people now show some interest in their own affairs and participate in policies and programmes of their areas, and the spirit of voluntarism and “awareness” among communities awakened.

On his part, the Director of the Decentralization Secretariat, Alhassan Kanu reminisced on the early days of Decentralization in Sierra Leone recalling the long suspension of Local Councils for about 30 years thus putting the newly resuscitated Local councils in a position needing massive capacity support which was provided in a robust and supply-driven fashion amidst serious conflicts between Chiefs and Councillors on new jurisdictional arrangements and over resources. IRCBP negotiated between Government and the World Bank in May 2004.

Outlining the main interventions that were adopted to put Sierra Leone’s decentralization in the appropriate direction, Director Alhassan Kanu said that the robust capacity building, coaching and mentoring support provided to the LCs from 2004 including the introduction of the rapid Results Approached (RRA) in 2004 to implement ‘quick impact’ projects coupled with the immediate secondment of Chief Administrators and Treasurers to the Councils as a stop gap was very instrumental in ensuring that the nascent Local Councils quickly went into the business of executing their mandates and delivering services to their localities. No lip service was paid to the important role that the preparation of the devolution roll out plans by the MDAs in 2005 and the commencement of devolution by the three (3) largest Ministries (Agriculture, Education and Health) since they already had deconcentrated offices in each of the districts, and lessons learnt from the devolution of their functions will facilitate the easier devolution of less complex functions. Another important strategic action that was undertaken was the nation-wide sensitization exercise undertaken in 2005 to ensure that the wider public understands, appreciates and fully support the decentralization programme. Director Alhassan Kanu also mentioned the introduction of the Comprehensive Local Government Performance System in 2006 to assess the relative performance of Local Councils and to also inform the capacity building effort within the framework of the decentralization programme. Worth mentioning is also the establishment of the Multi-Donor Trust Fund (MDTF) in 2006 to finance the decentralization programme, an experiment which has today been transformed into an Integrated Programme Administrative Unit in the Ministry of Finance.

On the key challenges and future of the Decentralization Agenda in Sierra Leone, the Director talked about improving the functioning of the Inter-Ministerial Committee (IMC) to ensure that Decentralization enjoys the policy oversight which was much anticipated during the crafting of the Local Government Act 2004. He threw to the debate the contentious argument of trying to strike a balance between upholding the basic tenets of democracy and good governance and ensuring effective and proper representation at the local government structures especially in countries where literacy level is extremely low. A major drawback of the current decentralization process in Sierra Leone, according to Director Kanu is the slow pace and poor quality of devolution which is affecting the effectiveness of the Local Councils to deliver the much needed services to their localities. He stated that out of 80 functions that were slated to have been completely and properly devolved to the Local Councils by December 2008, to date, in 2013, only 56 functions that have been transferred and in most cases shabbily done. Putting the devolution in its proper perspective, Director Kanu intimated, will be high on the agenda of the decentralization programme going forward. Other issues the Director mentioned include:

Sierra Leone also shared the lessons that have been generated during the course of the implementation of its decentralization reform. From the Sierra Leone experience, it was established that decentralization can be initiated successfully even in an early stage of post-conflict recovery. The Early introduction of the Rapid Results Approach and introduction of the LGDG facility and the annual assessment of eligibility provided the opportunity for visible projects and disciplined allocations both of which enhanced the cooperation of citizens in support of the Local Councils. The sustained political support at the highest level of government was also highlighted as a major contributor to the success of Sierra Leone’s decentralization programme. Other lessons include:

Another high point for Sierra Leone was the presentation and discussion of the case-study report dubbed Local Councils in Sierra Leone undertaken by Brendan Glynn (Consultant, AFTP5/SDV) and Marco Larizza (Governance Specialist, AFTP5). The report which was full of praises for Sierra Leone’s decentralization, indicated that the successful experience of Local Councils in Sierra Leone does offer a few interesting lessons which can inform future efforts to build successful institutions in other post-conflict and fragile settings. At the same time, the case of Sierra Leone raises interesting questions on the extent to which this historical experience can be replicated elsewhere. For instance, the creation of donor-funded implementing agencies and the use of LTAs staff was a unique approach within the country environment which facilitated LC’s institutional development.

The report further revealed that the Sierra Leone experience also shows how the historical, social and political environment provides critical opportunities to support LCs’ efforts to achieve successful outcomes. In particular, the post-conflict environment was conducive to the devolution of power and functions to sub-national authorities, given the legacies of the civil war and the quick alignment of international (donor) and national interests. To the extent that other countries do not share a similar ‘enabling environment’, it might be difficult to replicate a similar process of institutional transformation and success.

The opening session took the form of an opening plenary with a high level panel constituted by the World Bank President, Dr. Jim Yong Kim, Minister of Finance of the Republic of Liberia, Mr. Amara Konneh, Former Assistant Secretary-General, UNDP, Mrs. Amat Al Alim Alsoswa, the Vice President of the World Bank for Africa Region, Mr. Makhtar Diop, and joined by His Excellency Joaquim Chissano former President of Mozambique via a satellite link to discuss the subject ‘Stop Conflict, Reduce Fragility, End Poverty. During this plenary session, the World Bank President reaffirmed the World Bank’s commitment to continue to work with fragile countries and intensify the Bank’s support towards rapidly transforming these countries to more stable and prosperous nations. The Minister of Finance from Liberia was very articulate in hampering home the progress that fragile countries are making to rebrand themselves and catch up with other civilized and developed countries, thereby justifying the need for its bilateral and multilateral partners to massively support these efforts. He cited Sierra Leone as one of the Mano river Union countries that has made significant strides in building its economy, mentioning that Sierra Leone registered the second highest economic growth globally in 2012. 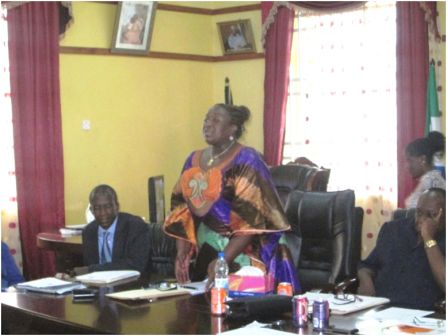