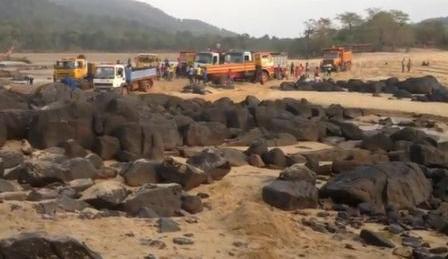 The Chairman of the San San Grun Boys at Kissy Dock Yard, Freetown, Mr. Foday Kamara, has expressed his membership’s satisfaction of the development strides of President Ernest Bai Koroma’s government especially for allowing them to comfortably do sand mining and trade.

Mr. Kamara described President Koroma as a unique father, adding that giving his group the opportunity to deal in sand mining in the deep sea off the shores of Sierra Leone is a joy to his membership and their families.

Talking to this Reporter during a meeting held at the Kissy Dock Yard community, Mr. Foday Kamara said that earning money has been difficult for the people of that community and that sand mining has been the only means for them to make a living.

He opined that the Government of President Koroma has proven to be reliable and have a passion for young people who constitute a greater percent of the population of Sierra Leone by giving them the opportunity to serve and to do business in a genuine atmosphere of understanding and production.

He disclosed that his members mine sand in the deep sea to help building contractors have a better sand to construct strong and safe structures for the people of this country.

He further stated that sand mining has made members of his group to be self-reliant and stopped being idlers who may have otherwise become criminals. He said this was their own way of contributing to the Agenda for Prosperity.

He encouraged his members to live to the expectations of the people of the local and international communities by helping in the sustainability of peace and security within the country.