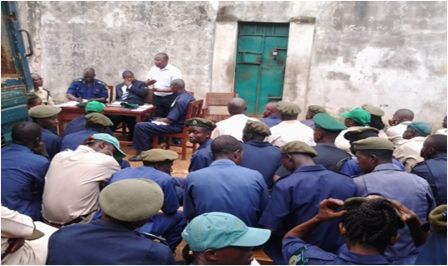 The Regional Manager of the Anti-Corruption has warned Prison Officers in Makeni to desist from all forms of corruption and corrupt practices in the discharge of their duties.

Speaking at a sensitization meeting with staff of the State Prisons in Makeni on Monday 30th September 2013, Mr. Patrick Sandi underscored the importance of the Prisons Department in enhancing the justice system in Sierra Leone and explained how corrupt practices in their operations can hinder that process. He reminded them of their responsibilities as public officers to resist and reject temptations of corruption and corrupt practices in the performance of their duties.

The Regional Manager highlighted some key offences in the Anti-Corruption Act 2008 that have bearing to their operations such as; offering, soliciting and accepting advantage, misappropriation of public/donor funds, protection of public revenue and property,  conflict of interest, corrupting a public officer, conspiracy to commit a corruption offence and receiving gift for corrupt purpose. He further informed them that the penalty for each of the offences was a fine of not less than thirty million Leones (Le 30,000,000) or a prison term of not less than three (3) years or to both fine and prison term.

The Regional Manager used the occasion to explain to Prison Officers present the various ways of making report to the ACC and protection of informants. He reminded them of their civic responsibility to report any act of corruption to the Commission.  “The ACC is in existence to make sure that things are done right in this country. Let’s fight to make sure our children and those yet unborn realize the benefits of a corrupt free Sierra Leone”.

In his statement, Senior Public Education Officer, Al-Hassan Sesay said the engagement was part of ACC’s public education approach in fighting corruption. He allayed the fears of Prison Officers present by explaining to them that the ACC was at the Makeni State Prisons to educate its staff and enlist their support in the fight against corruption in the country.  Mr. Sesay said the ACC was not on a witch-hunt institution but working towards the realization of a corrupt free Sierra Leone, which will ensure that the socio-economic needs of citizens are met. He therefore entreated all Prison Officers present to join the Commission in the fight against corruption.

Making their inputs, the Regional Commander North, Mr. Mustapha S. Conteh appreciated the sensitization drive of the ACC. He maintained that such educational drive will go a long way to minimize the incidences of corruption as they would be guided on what they should not do.  Mr. Conteh opined that the Prisons Department was going through a transitional stage from being punitive, to correctional centres but highlighted some of the numerous challenges they are facing. He admonished his colleague staff that such transition requires reformation of characters and rehabilitation of oneself.

The Officer-In-Charge of the Makeni State Prisons, Mr. Andrew K. Mansaray said it was a good opportunity for them at the Prisons to understand the operations of ACC and share ideas. On behalf of his colleagues, he promised the Commission that they would abide by the warnings and put into practice what they have learnt.

Other staff of the institution highlighted various concerns ranging from poor conditions of service to low motivation. They also suggested among other things various ways of collaboration between both institutions in the fight against corruption.

ACC diaolgues with city council an...