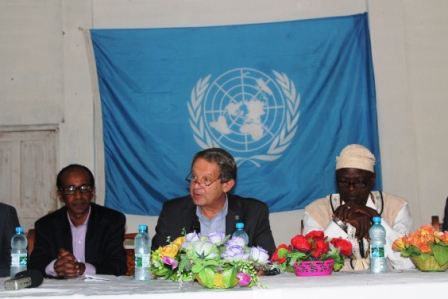 Koidu, District of Kono, 29 September 2013. – The United Nations Integrated Peacebuilding Office in Sierra Leone (UNIPSIL) successfully handed over its office in Kono to the One UN Family in Sierra Leone today. This is a result of a planned exit strategy that has been endorsed by the United Nations Security Council and discussed with the Government.  (Photo: United Nations Secretary-General’s Executive Representative and head of UNIPSIL, Jens Anders Toyberg-Frandzen addresses the townhall meeting on the handover of UNIPSIL to the UNDP-led UN Country Team. Photo: Silke Brockhausen/UNDP)

“This is a recognition of the achievements this country has made from hosting one of the largest UN peacekeeping missions ever to now contributing troops to international missions itself,” the United Nations Secretary-General’s Executive Representative and head of UNIPSIL, Jens Anders Toyberg-Frandzen, said during the handover ceremony. “Sierra Leone is no longer a country in conflict, it is not in post-conflict anymore but in transition to development.”

He commended the people of Sierra Leone for building up a professional military and police forces as well as for conducting three peaceful elections since the end of the conflict. “I was touched to see mothers with their children waiting patiently in line for hours in the heat to exercise their right to vote, strongly believing in the future of their country.” Youth groups in Kono publicly committing themselves to peace and development while denouncing violence at a youth conference this week was a further promising step on the path to sustainable nation building, he added.

United Nations Secretary-General’s Executive Representative and head of UNIPSIL, Jens Anders Toyberg-Frandzen, receives a traditional attire from Chief Foyor, Secretary of the Kono District Council of Paramount Chiefs on behalf of the people in Kono

“Success in building a prosperous, democratic and peaceful country is a shared responsibility of all Sierra Leoneans, including the country’s political parties, civil society, traditional leaders and others,” Toyber-Frandzen emphasized in his statement. “The changing footprint of the UN in Kono – the handover to the UN development agencies – will support addressing remaining challenges in this region. They need to be dealt with through development initiatives and dialogue.”  Toyberg-Frandzen also warned to set unrealistic expectations for the UN. “It cannot solve all problems. Sierra Leone has to take the lead and the UN country team is ready to continue its work with the people of Kono and ensure that development is progressing.”

Paramount Chiefs of Kono and heads of the United Nations Family at the closing ceremony of UNIPSIL. Photo: Silke Brockhausen/UNDP

UN missions have been supporting Sierra Leone since the end of the 1990s. In light of the significant advances that have been made over the past decade, the current mission, UNIPSIL, is set to fully draw down and transfer its responsibilities to the UN country team by 31 March 2014. The UN family contains 17 agencies, funds and programmes that support the people of Sierra Leone in socio-economic development. In addition to that, they are also taking over tasks from UNIPSIL such as strengthening of democratic and human rights institutions as well as the security sector reform.

UNIPSIL, a peacebuilding mission, succeeded UNAMSIL and UNOSIL. UNAMSIL, one of the largest UN peacekeeping deployments in history, helped to implement the Lomé Peace Agreement, disarming and demobilizing more than 75,000 ex-fighters, including child soldiers. UNAMSIL helped to restore government authority throughout the country after the conflict and played a major role in reforming the security sector. UNAMSIL was also instrumental in setting up the Special Court for Sierra Leone and has monitored and trained Sierra Leoneans in human rights. It helped the Government to set up the Truth and Reconciliation Commission, tasked with healing the wounds of war by bringing together perpetrators and victims of atrocities. It assisted in the return of more than half a million refugees and internally displaced persons after the war and the establishment of security sector structures.

UNIPSIL with around 80 staff began its work 1st October 2008, providing political advice to foster peace and political consolidation, offering support and training to the national police and security forces, and building the capacity democratic institutions in furtherance of good governance and the promotion and protection of human rights. 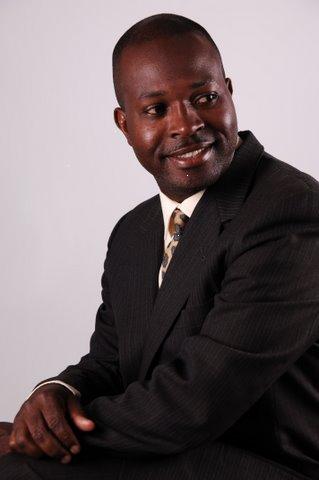