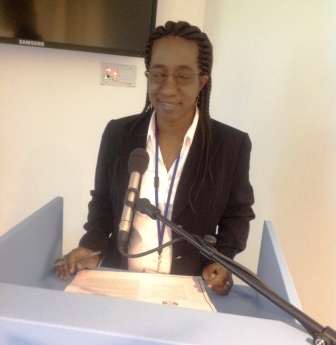 Registrar of the Special Court for Sierra Leone, Mrs Binta Mansaray (in photo) has expressed profound thanks and appreciation to the International Community through their embassies in The Hague for their “tremendous support” to the court since its inception ten years ago.

Addressing diplomats in The Hague after the Appeals Chamber’s verdict affirming the earlier 50 years jail sentence on Charles Taylor, Mrs Mansaray stated that the success of the court would not have been possible without the support and commitment of the government and people of Sierra Leone, the United Nations and other friendly countries. She also recognised the support from sister International tribunals like the Special Tribunal for Lebanon through the provision of space and a high tech courtroom in The Hague which enabled the SCSL to run trial proceedings 5 days a week.

“But the support provided goes far beyond equipment and infrastructure. It also included essential staffing support in critical areas such as court support, information technology and general services”.

“The Appeals Chamber jurisprudence has properly recognised and held accountable for the full range of atrocities committed during the war. For that the people of Sierra Leone and most especially the victims are grateful. I say thank you, thank you and thank you”.

Mrs Mansaray said a special ceremony will be organised on December 2nd in Freetown to mark the final wrapping up of the SCSL and the commencement of the Residual court which will be based in Freetown.

The Prosecutor of the Special Court Brenda J. Hollis emphasised that the Residual court that will be based in Freetown is for the enforcement of sentences, maintenance of archives and protection of witnesses, adding that the court will robustly pursue any one who harasses the witnesses who had testified in the court proceedings.

Reacting on the decision of the Appeals Chamber to uphold the earlier ruling of the Trial Chamber, Madam Hollis remarked that “this final decision affirms Mr. Taylor’s criminal responsibility for grave crimes which caused untold sufferings to many thousands, if not tens of thousands of victims in Sierra Leone. This judgement brings some measure of justice to those victims who suffered so horribly because of Charles Taylor”.

She furthered that Charles Taylor is the first former Head of State to be convicted for war crimes by an international criminal tribunal since Nuremberg in 1946.

“The Appeals Chamber today confirmed what the Trial Chamber made clear, that Heads of State will be held to account for war crimes and other international crimes. No person, no matter how powerful, is above the law. It affirms that with leadership, comes not just power and authority, but also responsibility and accountability… this sentence makes it clear that those responsible for criminal conduct on a massive scale will be severely punished. I commend those brave witnesses who came forward to testify. I also commend the people of Sierra Leone. Without their commitment to justice this trial would not have taken place, indeed this court would not have existed. Their resilience and courage gives us all great hope for a future of continued peace, justice and progress in Sierra Leone”.

President of the SCSL, Hon. Justice George Gelaga King heaped praises on the Registrar of the court and her team for “a job well done” and further expressed thanks and appreciation to all contributors to the work of the court over the years.