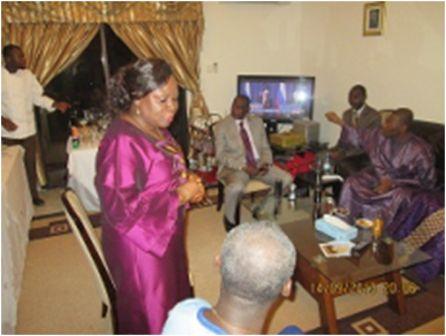 The Ambassadors of the Republic of Ghana, His Excellency Yakuba Abdulai, and Cape Verde His Excellency Francisco Perera DA Veiga, have in a farewell dinner ceremony hosted in their honor and on behalf of the ECOWAS GROUP OF AMBASSADORS in Senegal bid farewell to their counterparts in what both described as solemn, particularly as they have worked together over the years to further strengthen diplomatic ties between their various countries and built on the towers of ECOWAS Unity.  AMB. Bassir giving her welcome speech

The dinner which took place at the residence of the Sierra Leone Embassy in Dakar, was attended by the Ambassadors of Nigeria, Mali, Gambia, Liberia, Guinea, Niger and the Director General of GIABA, Dr. Abdulai Shehu. Also present, were the Charge d’ Affaires of Guinea, Liberia and Congo and other distinguished guests.

Giving her welcome speech, Host- Her Excellency Ambassador Khadijatu Bassir, who is set to take over as the DEAN of ECOWAS Ambassadors in Senegal said the occasion signifies the strong ties and cooperation enjoyed between the member States of ECOWAS. “It’s a time to sit and relax with colleagues as they are about to depart for re assignment in their Diplomatic career” She said.

Ambassador Bassir praised both Ambassadors for their contribution, knowledge and Cooperation to further strengthen the ECOWAS Goals and objectives during their tenure of office. “As ECOWAS Ambassadors our desire is to set the stage wherein, we will excel and help future Ambassadors to plant upon our foundation for a strong ECOWAS Region” she said.

According to her the legacy of the present ECOWAS GROUP OF AMBASSADORS IN SENEGAL will stand as a strong pillar of the region.

Presenting gifts to the departing Ambassadors on behalf of the Group, the Nigerian Ambassador Mrs. Katyen.C. Jackden, commended them for their services rendered and wished them prosperity in their next assignments.

Receiving the gifts, both Ambassadors expressed thanks and appreciation for what they described as a symbol of solidarity in the ECOWAS Region and called on them to continue to put their shoulders to their Diplomatic wheels in order for them to make perfection real.

The Malian Ambassador took the opportunity to inform that his country is now stable with a new President. “Please let me on behalf of my government expressed thanks and appreciation to your various governments and peoples for the support both material and financial accorded us during our recent period of instability. Mali is now a nation on the move, pushing towards her destiny. We remain a grateful nation. I mean an ever grateful nation” he said.

Harnessing the African Diaspora in... 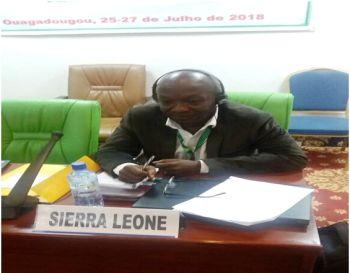