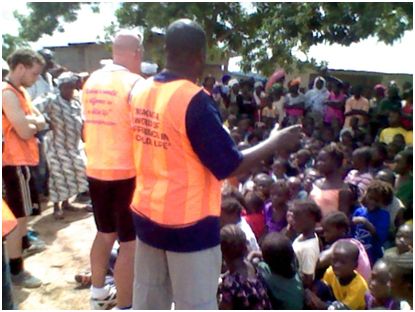 Teams For You (T4U), an organization of volunteers from Great Britain, recently paid a working visit to the Maranatha Primary School in the Deep Eye Water community in the Western Rural District of Sierra Leone where they spent time playing with and sensitizing parents, guardians, pupils and members of that community on child issues.

In a chat with this paper, the Director of  T4u, Mr. Dave Cooke, said they were invited to Sierra Leone by the Word of Life Church to spend time with deprived school children in the country.

He said the Government of Sierra Leone needs to make more effort to empower children, especially girls, across the country.

Mr. Cooke explained that their mission here was to make adults aware of the situation of school going children and the importance of education for the girl child.

He noted that they are also teaching sex education and using sports as an empowerment programme in the schools they have targeted in this phase of the project.

On their expectations, he said their dream was to see girls in schools and not as mothers as is the case in most communities in the country.

Pastor Abu Bakarr Koroma, the Founder and General Overseer of Word of Life Church in Sierra Leone who invited T4U to the country, noted that they targeted ten schools from Jui to Tombo. He explained that in the future, they hope to extend the project to the provinces. He stated that their major goal was to bring hope to school going children.

Speaking on the challenges encountered in the project, Pastor Koroma maintained that they were expecting greater numbers of children to benefit than the sizable one that they dealt with.

Head Teacher of Maranatha Primary School, Ms. Margaret Conteh told this press that the visit of members of T4u was a laudable approach to the school. She added that the sensitization activities by the team of volunteers would take them a long way in so far as girl child education is concerned.

She expressed optimism that T4u and Word of Life Church would continue to assist and show them the way.

She explained that more children would have benefitted from the visit had it not been that schools are now on holiday. She expressed the need for such opportunities to continue to meet them in that remote part of the country.

High rate of discrimination in RSL...