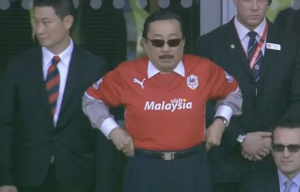 In their first ever Premiership home match, Cardiff City beat Manchester City 3-2 in South Wales, with all of the goals coming in the second half. City, who finished second last term and are only a season removed from being the defending champions, took the lead seven minutes into the second half with a stunning strike from 25 yards by Edin Dzeko, who had been played in by a Sergio Aguero backheel. However, the advantage for the visitors lasted only eight minutes as Aron Gunnarsson scored Cardiff’s first top flight goal in more than 51 years, as he pounced on a loose ball in the area after Joe Hart could only parry a shot by Fraizer Campbell. The England keeper was then at fault for Cardiff’s second, flapping at a brilliantly delivered corner from Peter Wittingham that was headed into the empty net by Campbell. A product of the Manchester United youth academy, Campbell, who cost the Welsh side just £650,000 when they bought him from Sunderland in January, showed his aerial prowess again three minutes from time, converting another set piece to give his team a 3-1 lead. Manuel Pelligrini’s side did put up a fight and pulled the deficit back to one with a goal from summer signing Alvaro Negredo, but the Welsh side held on through six minutes of injury time for a famous victory. The continuing controversy of the club’s rebranding was in evidence during the jubilant scenes at the final whistle, as most of the crowd were wearing Cardiff’s traditional blue colors, while only some had adopted the new red strip that was brought in by owner, Vincent Tan last summer. Nevertheless, his presence on the sideline – looking more like a character created by the late, great Andy Kaufman, than a billionaire businessman – did not dampen the supporters’ celebrations and, if there are many more days like this at the Cardiff City Stadium, it would not be a surprise for the crowd to be a sea of red by the end of the season.  (Photo: Unlike on his trousers, Vincent Tan does not keep a tight (nor high) belt on Cardiff’s transfer budget)

Elsewhere last weekend, Tottenham had an almost identical second game to their first of the season against Crystal Palace, as they dominated their fixture against Swansea, but could not convert any of their chances except for a penalty, scored by Roberto Soldado. Spurs had been denied a spot-kick towards the end of the first half, when Jonjo Shelvey upended Andros Townsend in the box, but the referee adjudged the foul had taken place outside of the area and awarded a free-kick. Shelvey and Townsend were again the players involved when Spurs were awarded a penalty after the break, but this time there was minimal contact and replays proved the Tottenham youngster dived, showing perhaps that Gareth Bale can be replaced. Liverpool have also won both of their first two matches 1-0, as they beat Aston Villa, once again thanks to a Daniel Sturridge strike; Arsenal got off the mark for the season, as they overcame Martin Jol’s Fulham 3-1 at Craven Cottage; Hull had to play more than an hour with 10 men in their match against Norwich after having Yannick Sagbo sent off for an attempted headbutt, but they held on to win their first home fixture back in the Premiership, 1-0; and Stoke came from behind to beat Crystal Palace 2-1. Southampton earned a point with a late equalizer from Jose Fonte in their game with Sunderland; both Everton’s fixture with West Brom and West Ham’s trip to Newcastle ended goalless; as did Manchester United and Chelsea’s meeting on Monday night. In that match, Jose Mourinho deployed four attacking midfielders, but no recognized strikers in his starting lineup, emulating the Spanish team of last summer’s European Championship. Even if the tactics were somewhat negative, his side currently sit top of the Premiership on seven points, as they beat Aston Villa in midweek, a fixture brought forward because of their involvement in the European Super Cup this Friday.

With the transfer deadline approaching next Monday, there has been a flurry of activity – or in the case of a certain Welshman’s prospective move to Real Madrid, inactivity – over the last week, with Chelsea signing two players from Anzhi Makhachkala: Samuel Eto’o, who teams up with Mourinho again after their time together at Internazionale; and Willian, who seven days ago was on the verge of becoming a Tottenham Hotspur Waffles player. That all changed last Thursday night, as Roman Abramovich made a phone call to Anzhi owner – and his fellow Russian oilygarch – Suleyman Kerimov and convinced him to sell the Brazilian to Chelsea rather than to their London rivals. At a press conference on Friday, Mourinho stated that it was up to the player to decide where he would go, but Willian had already made up his mind – hinting with a nod that the choice was Chelsea – and the Portuguese manager suggested Spurs should have done the medical in secret to avoid the deal being hijacked (before confessing that they still needed to perform their own medical). As it turned out, being beaten to the signing of Willian has actually worked out better for the Waffles, as they are instead on the verge of buying the 21-year-old Argentinian, Erik Lamela from Roma for a fee of around £25m and he has the pace, skill and great left foot to make him an ideal replacement for the outgoing Bale.

In European action, Arsenal comfortably qualified for the Champions League group stages for the sixteenth consecutive season, as they defeated Fernebache 5-0 on aggregate; Celtic came back from a 2-0 first leg deficit to knock out Shaktar Karagandy by winning their home fixture 3-0, with the last goal coming in the 92nd minute; while both Swansea and Spurs hold commanding leads going into the second part of their Europa League ties, as they beat Petrolul Ploiesti 5-1 and Dinamo Tbilisi 5-0 respectively. In the draw for the group stages of the Champions League, Arsenal were paired with Marseille, Borussia Dortmund and Napoli, meaning Gonzalo Higauin will play at the Emirates, albeit in opposition to the Gunners; Chelsea drew two teams they knocked out of last season’s Europa League, Steau Bucaresti and Basel, as well as Schalke; Manchester City face the holders Bayern Munich, Victor Plzen and CSKA Moscow ; while Manchester United have Shaktar Donetsk, Bayer Leverkusen and Real Sociedad in their group. Celtic, who last season were unlucky to lose at the Camp Nou and then beat Barcelona at home, will face the Spanish Champions again this year, as well as two more former winners of the competition, Ajax and AC Milan.

The highlight of this weekend’s fixtures, the last before a week’s break for international action, is the North London derby at the Emirates on Sunday. In the last two seasons, Spurs have taken the lead away at Arsenal, but have been beaten 5-2 on both occasions and those defeats were a big part of why the Waffles failed to qualify for the Champions League and continued their lengthy run of finishing below their bitter rivals. Theo Walcott has been the chief antagonist of Tottenham at the Emirates and it will be up to Danny Rose, who has established himself as the first-choice left-back ahead of Benoit Assou-Ekotto, to reign him in on the right-wing. While Spurs should enjoy the physical advantage in the middle of the park, with Mousa Dembele, Paulinho and Etienne Capoue, but they will have to try to stop the tricky passing of Tomas Rosicky, Santi Cazorla Aaron Ramsey, Jack Wilshere and the returning Mathieu Flamini, who just signed a three-year contract to return to Arsenal. Expect the Waffles to take an early lead before Arsenal come storming back for a big victory that will confirm their season is back on track without the need for any big money signings, while anyone betting on a Spurs half-time lead and Gunners win overall will be in for a big pay-day.

Elsewhere, there is the friendly matter of Liverpool vs Manchester United, which will be slightly less tempestuous than in the last two seasons if only because Luis Suarez is still suspended – though he will return from that 10 game ban for biting Ivanovic in time for the League Cup fixture between these teams next month. Manchester City take on a newly promoted side for the second week in a row, this time they face the Hull City Tigers at the Etihad Stadium; Fulham travel to Newcastle; Crystal Palace and Swansea will be seeking their first points of the campaign against Sunderland and West Brom respectively; Everton are in Wales to play Cardiff; West Ham entertain Stoke; while Norwich and Southampton meet at Carrow Road. As mentioned above, Chelsea and Aston Villa have no game this weekend as they played last Wednesday, as the Blues play in the European Super Cup for the second season in succession, this time taking on Champions League winners Bayern Munich in Prague.