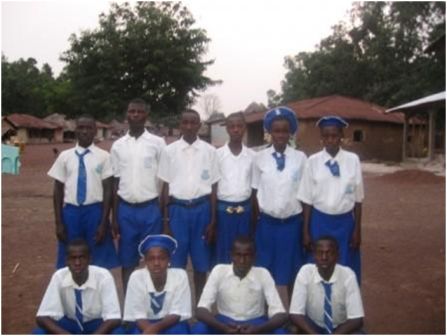 In 2012, the Sherman Nonprofit Consulting firm introduced a scholarship program for poor students to continue with their secondary school education up to college level.  The aim of the scholarship fund is to help students who are desirous of pursuing their education but couldn’t do so due to poverty and lack of funds to continue their schooling.   The lack of funds and basic needs has resulted to girls underage being pregnant and end up in forceful marriages and for boys to engage in child labor which is very prominent in Sierra Leone.   Looking at these disadvantages, the Sherman Nonprofit Consulting firm selected 11 students both boys and girls so that they pursue their education up to College or University level.  Upon receiving reports of their progress for the 2012-2013 academic years, 9 students succeeded in meeting the criteria set up for the scholarship fund.   Therefore, the Sherman Nonprofit Consulting is renewing its scholarship funds for 2013-2014 academic years.

Poverty has become the ‘boss’ with the help of corruption determining who should go to school and who should not. Poverty determines children’s faith. Huge numbers of boys are dropping out of school, loaded with evil intention and sophisticated weapons – declaring a war of robbery while girls fail to complete their studies and end up with early pregnancy. Some of them are so victimized by poverty that they have to sell their bodies on campus as a mean of survival.

The impact of poverty on education is of great significance and it is tormenting to see students struggling and battling the hardship to study without any support from the government or their parents. It is depressing to see our graduates unemployed after all the hardships of studies and poverty. This has led to the development greater population of poor people in the country.

One of the major constraints in Sierra Leone’s growth challenge has been the lack of human capital development. The enrollments rates have not been picking up fast and the future trend on human capital does not look optimistic. The non-school attendance rates in Sierra Leone are very high with wide gender disparities.  Data indicate that one in every three girls and one in every 4 boys does not attend school. The rural non-schooling is higher, with 37 percent for girls and 28 percent for boys.  Sierra Leone in its strategy for accelerated growth in Sierra Leone argued for massive investment in primary education as a way of building the necessary human capital for sustainable growth.  In this context, it is important to understand the dynamics of household decision making of whether to send children to school and/or work, to benefit from investments in education. If not, colossal public investments in education are not likely to get children into class rooms.

One out of every four children works in Sierra Leone in either a labor market or a household enterprise, while one out of every five children goes to school and works. Three out of every boy child was attending school, while it was slightly lower for girls. The probability of children’s labor participation declines with rising levels of household welfare, although this relationship is very weak. The corresponding relationship with schooling shows that school participation clearly increases with welfare levels indicating the burden of schooling expenses on poor families. Households who earn a larger share of their income from family enterprises, farming or otherwise, are likely to have a greater demand for labor and have a higher probability of obtaining them within the household as it is cheaper and flexible. This results in high child labor participation in rural farming and urban informal sector, making the efficacy of legislation questionable.

Child labor and schooling increase with the age of the child. Child labor is not independent of the decision to school. Hence, addressing school participation cannot be independent of demand side issues. The high cost of schooling pushes children into the labor market to enable them to afford school or pulls them away from school as they cannot afford it. Hence, the official and unofficial fee charged for schooling is negatively correlated with school participation. Apart from reducing the cost, the school system needs to be flexible enough to recognize and adapt according to the constraints of schooling in rural communities. The quality of education and its relevance to the labor market needs to be given priority in future education reforms to ensure improvement in public perception, which plays a key role in the decision to send children to school.

In terms of education, a relationship can be found between poverty and education in the sense that poverty, again, determines what level of education people should have in Sierra Leone. Poverty has crippled our educational system. Schools are a shadow of what they were in the old days. Public schools and higher institutions in the country are neglected, have poor equipment, and lack facilities and resources. The government has failed to provide good teaching and learning facilities for schools for children to learn.

Food and shelter have become the major problem in the country because of unemployment and poor earning levels. People live in hunger with shattered lives. Parents are unable to feed their children or even provide daily meals, how would they have the means to send their children to school? People have to fill their stomachs before anything.

This Week In English Football – Ca...

Between prosperity and Sierra Leon...