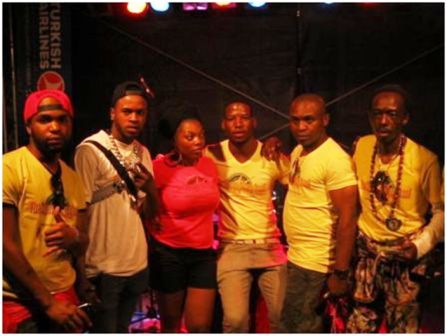 One of the most wanted and successful Ngoma Africa Band (Golden Voice of East Africa) also commonly known as FFU(Field Force Unit) or “Anunnaki Alien” base in German, have been named and awarded is “Best African band” 2013 after thrilling over 100,000 fans at International African festival Tubingen 2013,in Germany.

Ngoma Africa Band have numbers of talented musician including Mult-Talented soloist Christian Bakotessa aka Chris-B,others is Matondo Benda aka Professor Mo Benda,Flora Williams,Aj Nbongo,Jonathan Sousa aka “Jo Jo” (Crazy Drummer),Glory,Jessica Ouyah, band is making tour with up to eight musician including dancers,mots of their songs in kiswahili and other Eastern African languages.

Ngoma Africa Band have reported that have over 30 million fans worldwide and become Global people’s band.

For further information about Ngoma Africa Band and to listen to their music, please visit www.ngoma-africa.com

ACC interacts with staff of Tonkol...