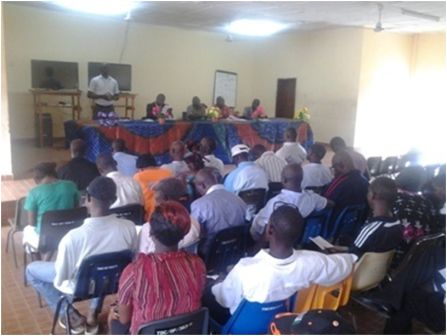 In its quest to annihilate corruption and corrupt practices in Government Ministries, Departments and Agencies (MDAs), the Anti-Corruption Commission Northern Regional has on Wednesday 21st August, 2013 educated staff of the Tonkolili District Council (TDC) on the evils of the corruption and enlisted them in the fight.

Welcoming ACC to the Council, the Deputy Chairman of TDC, Councilor Foday Y. Kanu expressed utmost satisfaction for the sensitization drive and assured the ACC that his Council was determined to work with them for proper management of public resources.  Mr. Kanu emphasized that ACC was not only concerned about indicting people to court as perceived by many, but to also educate public officers on the wide-ranging negative consequences of the malaise.  Deputy Chairman encouraged his listeners to be agents of the Commission to propagate the message of transparency, integrity and accountability across the district.

Espousing on the rationale for the meeting, ACC’s District Coordinator Tonkolili Mr. Abdulai Saccoh told the Councilors and Council Staff that the engagement was to update them on the work of the Commission, the dangers of the menace and solicit their valuable support.

Mr. Saccoh maintained that the fight was getting tougher as corruption is dynamic.  He implored the audience to partner with the ACC for improved Conditions of Service.  ACC’s Coordinator reiterated that the fight required the support of all and sundry, that was why the Commission is educating public officers to fully understand the hazards of corrupt practices.

Dilating on the corruption crimes as contained in the AC Act 2008, the Regional Manager ACC North, Mr. Patrick Sandi underscored that Councils were attracting huge resources from Central Government for the development of their municipalities.  He therefore, advised the Council Staff to use those resources judiciously as prescribed by law.

Mr. Sandi furthered that, the ACC was determined to deal with corruption at all levels irrespective of the persons involved.  The Manager North however encouraged his listeners to work diligently for the good of the Country.  Mr. Sandi highlighted offences such as: possession of unexplained wealth, conflict of interest, protection of public revenue and property, using influence for contracts, peddling influence, abuse of office/position, conspiracy to commit a corruption offence and receiving gifts for corrupt purpose.

The Manager stressed that the penalty for each of the offence is a fine of not less that thirty Million Leones (Le 30,000,000) or imprisonment of not less than three (3) years or both.  He called on the leadership to be accountable so that TDC will be seen providing the much needed services to its people.

Making their inputs, senior Council staffs, pleaded with the ACC to advocate to Government for better working conditions and timely disbursement of quarter allocations.

The meeting which was chaired by the Deputy Chief Administrator Tonkolili District Council, Mr. Mohamed B. Kamara was climaxed with questions, answers and clarifications.