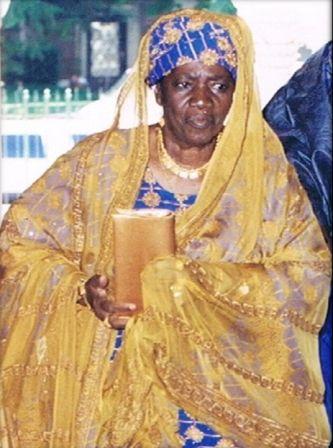 The Imam made these remarks during the ‘Juma’ or Friday prayer where thousands of people from all of walks of life converged at the Mosque to pay their last respects to the late HaJa Fadika, who died at the Davidson Nicole private hospital, Cole Farm, off Wilkinson Road.

Sheikh Fomba explained to the Muslim congregation that they should not be surprised for the wonderful reception accorded her since she died on Monday, noting that thousands of mourners including officials of the governing APC party led by the president Dr. Ernest Bai Koroma, VP Sam Sumana, Ministers and senior officials of the main opposition SLPP led by the former running mate to the SLPP presidential flag bearer of the 2012 general election (Rtd) Brigadier Gen. Julius Maada Bio, Mrs. Kadi Sesay, members of the judiciary, Chinese nationals, Europeans and a host of other people.

He said the late woman was a woman of substance who strictly followed the rules of marriage and respected her late husband.

Imam Fomba told the congregation that Haja Fadika was a devout Muslim woman who not only loved and cared for her children but other children within the Magazine community.

He called on the women to follow in the footsteps of the late Haja Fadika.

The late Haja Fadika was born from a devoted Muslim home in Freetown.  Her parents migrated from Guinea to Sierra Leone to settle after their marriage.

Haja Tigidankay Fadika was born at 7, Jenkins Street, Freetown in the year 1919 and was brought up by her parents.

At the age of 19, she got married to the late Gibril Deen Fadika.

The late woman was a business woman selling fish and Gara Cotton as the second wife to the late Pa Gibril Deen Fadika; she showed humility to the first wife Aunty Marie Fadika as tradition demands.

After the funeral service at the Madigo Central Mosque her remains were conveyed to the Kissy Road Cemetery with a long procession comprising of thousands of mourners including school bands .