New university for the East 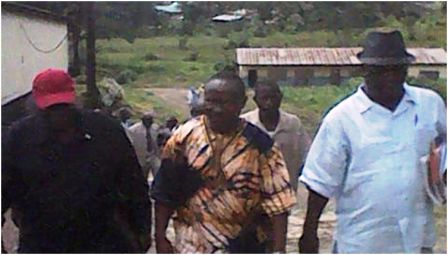 New university for the East

Eastern Polytechnic is set to be the first university in the east of Sierra Leone, according to its acting principal, Francis G. Allieu.  (Photo:  Committee chair, Principal Francis G. Allieu on a conducted tour)

He made this disclosure to the Parliamentary Education Committee on 22 July in Kenema while the committee was on a working visit to educational institutions in the east.

“On the transformation of this polytechnic into a university – it was President Koroma who first said it to us,” Mr. Allieu disclosed. “Presently we are putting a document for the Tertiary Education Committee about this. And once we are done, we will forward it to them to consider making the Eastern Polytechnic as the first university for the east.”

Hon Muluku Sualiman, Chairman of the Committee, said there is a point to this because there is N’jala University in the south, and University of Makeni in the north, as such the east is entitled to one also.

Eastern Polytechnic has come a long way to its present position of being relevant to today’s middle level employment market.

Since 1991 when it relocated in Kenema from Bunumbu (then Bunumbu Teachers College), it has continued to climb upwards. It has two campuses (at Bunumbu and at Kenema), including a third at Kono which is presently under renovation. It is offering two training programs – one on campus, and the other via distance learning.

“By 1994,” continued Mr. Allieu, “we had obtained permission to offer a head teacher’s certificate for both primary and secondary.  In 2001, we started offering degree programs, and in 2004 we saw the need for nurses training courses – which, like the degree programs, is also going well. Student population is 2,755 regular and 320 offering distance education.”

For its bachelor of engineering program, candidates start the first two years there and on the third year proceed to Fourah Bay College where they will continue until graduation in the fourth year (two sets have graduated presently).

But the polytechnic has a lot of challenges – ranging from lack of laboratories to lack of dormitories.

The Registrar, Adonis Kanneh, said the government has a lot of commitment, which is they are not blaming them for not taking the polytechnic on board yet.

“But we are exploring all possibilities to make us move on,” he said. “President Koroma before now made some donation to us, which we used to rehabilitate some classrooms, a health centre and a few staff quarters. We also undertook some projects on a library since we didn’t have one, and in fencing our compound. We have also approached Nassit for them to invest in building dormitories for us, including the Kenema District Council (KDC).  As for the KDC, we want them to start in the next academic year because students are faced with a serious challenge of accommodation, including members of staff.”

“Student number is increasing,” rejoined Principal Allieu, “so we are constrained with sufficient materials.  Yes, we have made linkages with industries to have industrial trainings for our students.  Yes, student numbers have increased in the sciences, and we may not have the equipments, but we make sure that students are using the equipments in the institution where they are going in to work.  And as for those who are not getting this training experience like teachers for example, we have two laboratories where we teach them practicals.”

In their response, members of the Committee said it is indeed important to know what is going on, especially as polytechnics are at the centre of the middle man power.

Hon James ND Allie said we should try to promote the sciences in schools, and there are hardly laboratories practicals for students – this should change to let students improve on practicals.

Hon Dr. Abdulair Sesay said the decline in the teaching of sciences is affecting Sierra Leone.

“I commend Eastern Polytechnic for establishing a laboratory; without a good laboratory you cannot be a good doctor; continue to improve on your laboratory; the problem of science teaching is more a problem of African countries because they cannot afford it; but it is very necessary.”

“But you don’t have to rely on government alone, try and partner with other institutions and learn from them.”

Commit those rapists to long jail...