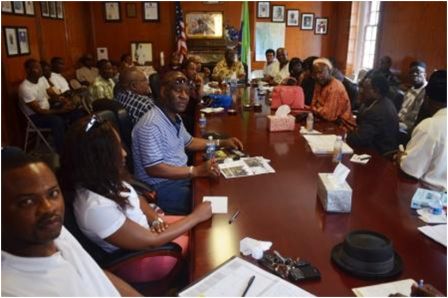 Plans are in the works for President Ernest Bai Koroma’s visit to different parts of the United States of America, when he shall have arrived in September 2013, for the United Nations General Assembly.

Addressing community leaders and heads of organizations – including the newly elected executive of the All People’s Congress (APC) Washington DC Metro Area and heads of different organizations including representatives of the APC North America, on July 20, 2013 at the 1701 19th Street NW, His Excellency Ambassador Bockari Kortu Stevens welcomed his guests and described the meeting with his compatriots as the “first in a series of lined up planning meetings, for President Koroma’s visit in September this year.”

“It has always been the practice of the Sierra Leone Embassy to involve the Sierra Leone Community in the Washington DC Metro Area (Washington, Virginia and Maryland) in the planning of such important events because Sierra Leoneans in this Metro area formed the largest in terms of number in the USA.

In addition, we are also working on other meetings in New Jersey, Philadelphia, New York etc., because there are plans for President Ernest Bai Koroma to visit some of these places, albeit plans are subject to change.

Ambassador Stevens described the Sierra Leone Diaspora as a huge stakeholder in the MCC Compact. and warned against party and tribal propensity.

Ambassador Stevens further encouraged all to be part of the MCC Consultation and support President Ernest Bai Koroma who has made Sierra Leone a very proud nation.  He assured members of the different political parties, Community and organizational heads represented that the minutes of meetings will be circulated to them.

Ambassador Stevens admonished members of the various groups to spread the good news about President Ernest Bai Koroma’s coming to the United States of America for the second time in a year and “prepare to listen to what he has to tell you.”

Community leaders praised Ambassador Bockari Stevens and embassy staff for the new face that they have given the embassy, which makes them very proud to be associated with activities of the country.

Almost one month ago, the President of Constituency for Africa Melvin Foote and Washington Redskin Safety Super Star Madieu Williams met with Ambassador Bockari Kortu Stevens and Deputy Chief of Mission Ambassador Ibrahim S. Conteh at the 1701 19th Street Chancery, and discussed pertinent issues relating a special guest and keynote speaker role at the World Bank for President Ernest Bai Koroma during a Constituency for Africa (CFA) town hall meeting on Africa, while here in the USA.