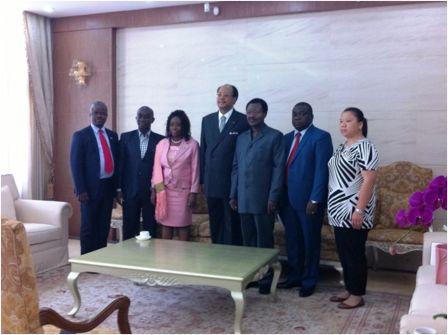 Sierra Leone’s envoy to the People’s Republic of China, His Excellency Ambassador Victor Bockarie Foh recently embarked on a series of diplomatic courtesy calls to a number of African Ambassadors in China, such as the Ambassadors of Benin, Guinea, Cape Verde and Liberia.

The aim of the visits that started on the 22nd July was to establish a common working relationship with colleague Ambassadors. The visits were also meant to familiarize himself with colleagues in the diplomatic community.  (Photo: Amb. Foh and his Embassy staff seen here with the Ambassador of Benin)

On the 22nd of July, Ambassador Foh paid a courtesy call on the Ambassador of Benin to the People’s Republic of China, Ambassador Sedozan Apithy. In his remarks, Ambassador Victor Bockarie Foh thanked his colleague from Benin for   welcoming him to Beijing upon his arrival to take up the Ambassadorial job, slightly over a month ago, saying, “As an African brother, I was happy that you were at the airport to receive me and I am grateful.”

Ambassador Foh commended the leadership of Benin who, two years ago had the presidency of the African Union. Sierra Leone, Ambassador Foh said, believes in the values and principles of the African Union and specifically called for greater collaboration between him and Ambassador Apithy. “We value the AU and we also strongly believe in coming together, as we support each other”, he said.

He also stated that both Sierra Leone and Benin share a lot in common, making reference to the economies and governance structures of both countries.  His Excellency Victor Foh while extending the hand of friendship and brotherhood to his colleague also assured him to count on the Sierra Leone Embassy at all times “as we will support each other at both bilateral and multilateral levels.”

Responding, Ambassador Apithy encouraged Ambassador Foh to utilize his political experience whilst working with the Communist Party of China. “From experience, I would advise you to have a good link with the CPC of China. I know that when you have a good relationship with them (CPC) you can enhance the relationship with China” he said. Ambassador Foh was also advised to closely work with the Chinese business community as “establishing contact with them will be very useful”

His decision to welcome Ambassador Foh at the airport, he said, was out of the belief that as African brothers, it is his responsibility to perform this brotherly role. He called for continuous collaboration at all times.

Reacting, Ambassador Foh said, such suggestions for closer linkage with the CPC were relevant and useful whilst assuring, that coming from a political background, he will take the advice seriously, as “I am going to get closer to the Communist Party of China”. Ambassador Foh also informed Ambassador Apithy about the long standing relationship between the APC and the CPC since the days of Chairman Mao Zedong of China and late President Siaka Stevens of Sierra Leone. He also highlighted the crucial role Sierra Leone played in triggering the debate for China to enter into the United Nations General Assembly.

On the business portfolio advice by Ambassador Apithy, Ambassador Foh said China is a growing economy that has the potential of becoming the world’s number one economy. The Embassy, he said, will continue to utilize the expertise of its Commercial Section in exploring investment opportunities in China.

In a related development, Ambassador Victor Foh, on the 23rd July, paid a courtesy call on the Ambassador of Guinea to the People’s Republic of China, His Excellency Diare Mamady.

Welcoming Ambassador Foh, the Guinean envoy elaborated on the political spirit and commitment of Ambassador Foh towards supporting the Presidents of the MRU countries, which he said, will largely help them as MRU Ambassadors in China to overcome their challenges and difficulties.

Ambassador Mamadi briefed Ambassador Foh on the workings of the Forum on China-Africa Cooperation (FOCAC) which he said, deals with African countries mostly at bilateral levels, in terms of development cooperation. He however asked Ambassador Foh to join them as MRU Ambassadors and see how they start working on regional integration for better results oriented projects.

Going further, Ambassador Mamady informed Ambassador Foh that funding from the Chinese has always been available for Africa especially within the framework of FOCAC but called on them to “keep working with the framework of regional cooperation. We should not be working alone but work as a team in carrying out projects within the sub regional framework”

Ambassador Mamadi also informed Ambassador Foh of the sub regional economic free zone that they have been working with along the MRU Basin and called on Ambassador Foh to work with them for better result.

Responding, Ambassador Foh informed Ambassador Mamadi, that he is relying on the support and cooperation of the other Ambassadors of MRU.  He also underscore the need for closer collaboration saying, “…when we come together as a union (MRU) we get things done better. I will assure you that we will be each other’s keeper and we will be sharing ideas for the good of us all.”

It was also during the visit to the Ambassador of Guinea that the Deanship of MRU Ambassadors was handed over to Ambassador Foh, by virtue of his age.

On the same day, Ambassador Foh also met with the Liberian Ambassador to China, HE Jarjar M. Kamara. They both discussed issues of bilateral cooperation and the sharing of ideas for better work relation. Ambassador Kamara spoke of how impressed he was, with the progress he saw on his recent visit to Sierra Leone, and specifically made reference to the infrastructural development advancement.  He called on Sierra Leone to continue pushing the momentum of development. He said, given what he sees happening currently in terms of development, “in the coming years, Sierra Leone will lead a number of countries”

Ambassador Foh on his part called for closer cooperation between him and his colleague especially in the marine and security sectors of the two countries. He also commended the progress Liberia has made over the years, especially in the involvement of women in the country’s leadership. He referred to the country as “an admirable one” and “the pride of Africa in giving us the first female President”

l-r Victor Foh with the Ambassador of Cape Verde

In all of the courtesy calls, Ambassador Foh was accompanied by the HOC Paul Minah, the Financial Attaché Amara Koroma, the First Secretary Augusta Akibo-Jones and the Press Attaché John Baimba Sesay.